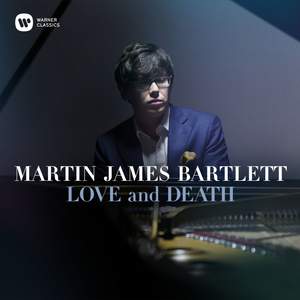 [The final work] is the standout performance on the disc, in which Bartlett shows his true pianistic colours with a vicious, visceral reading of the second of Prokofiev’s three ‘War Sonatas’…His... — Gramophone Magazine, June 2019 More…

The BBC Young Musician of the Year winner talks to Katherine about his debut solo recording on Warner, which takes its title from a work by Granados and also features music by Bach, Schumann, Liszt and Prokofiev.

Since his 2014 victory in BBC Young Musician of the Year competition, Martin James Bartlett has built a considerable international reputation. “Love and Death”, with its imaginatively conceived programme, gives proof of his artistic range.

"I'm absolutely thrilled to have signed with Warner Classics and to release my debut album Love and Death,” he says. “These are two elemental themes that have inspired breathtaking masterpieces from poets and composers for centuries. My album will feature gloriously beautiful music by Bach, Schumann, Wagner, Liszt and Granados, culminating with an impassioned and fiery 'War' Sonata of Prokofiev and I can't wait to share it with everyone."

In creating the programme, Bartlett’s starting point was Liszt’s transcription of Schumann’s passionate song ‘Widmung’ (‘Dedication’), set to a poem by Friedrich Rückert. “It is a love song that also speaks of death,” he explains, “and it concludes with a quote from Schubert’s ‘Ave Maria’, introducing the idea of heavenly love.” These themes are explored throughout the album.

[The final work] is the standout performance on the disc, in which Bartlett shows his true pianistic colours with a vicious, visceral reading of the second of Prokofiev’s three ‘War Sonatas’…His pacing and attack in the two outer movements are inspired and very exciting…I look forward to Bartlett’s future recordings with keen anticipation.

His Bach-Busoni and Bach-Hess are as poised and finely graded as you could wish. If his Petrach Sonnets are more interior and less volatile than some (Horowitz in No 134 – ‘I fear yet hope, I burn yet am turned to ice’), his natural fluency and grace are a joy. Here is a pianist of present glory rather than future potential.

The 2014 BBC Young Musician of the Year Winner emerges as a thoughtful, poetic soul as well as a formidable technician on this imaginatively-conceived programme of Bach, Schumann, Liszt, Granados and Prokofiev – song and opera is one of the unifying threads running through the album, and Bartlett certainly knows how to make the piano really sing. Up there with Igor Levit’s Life Album, for me.

An intriguing, exquisitely played sequence ingeniously probing the eternal verities of the title.

Bartlett’s ability to think long-term, rather than give in to immediate excitement, is probably his most impressive trait. No 2 on his score card may be his unaffected delicacy of touch, colour and tone, brilliantly shown in the three Petrarch sonnet settings from Liszt’s Années de pélerinage. Bartlett is never a fancypants, the besetting sin of a few pianists I could name: everything works to illuminate the music. You could even call him self-effacing, although he’s not short of passion.