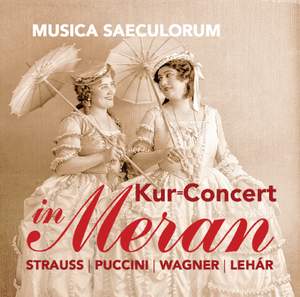 An excursion into the time of the kuk monarchy. Around 1900, the idyllic Merano in South Tyrol was not only a spa town for high society but also a popular holiday destination far beyond the borders of Austria and Hungary.

One of the attractions of the city were the concerts of the spa music, which played open-air in the pavilion or in the Kursaal for entertainment and dance. A look at the archive of Kurmusik shows that the musicians entertained young and old with arias and orchestral music from brand-new operas. It's hardly surprising that the Strauss family played a dominant role in terms of dance music.

Speaking of orchestra, this is of course a salon orchestra with a handful of strings, flute, oboe, clarinet, trombone and percussion as well as harmonium and piano as foundation. An unfamiliar, fascinating, colorful sound.

Philipp von Steinaecker has recovered some of the treasures from the archive with his Musica Saeculorum, using the original vocal material of the Kurmusik Meran.