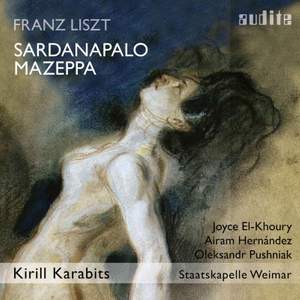 The torso of Liszt’s Sardanapalo may only last around 50 minutes, but it packs in such a richness of gratification that it is hard to see where the opera would have gone from there...The music... — Financial Times, 23rd February 2019, 4 out of 5 stars More…

Reconstructed by the musicologist David Trippett, the single completed act of Liszt's abandoned opera on a subject by Byron reveals what the composer's son-in-law Wagner described as 'the claw of a lion'.

The musicologist and driving-force behind today's Recording of the Week talks to Katherine about the mysterious genesis of Liszt's uncompleted opera, and the process of reconstructing the manuscript for performance.

Contrary heroes: Symphonic poem Mazeppa and the opera fragment Sardanapalo performed by Karabits and the Weimar Staatskapelle. Sardanapalo who prefers wine and concubines to politics and warfare, and Mazeppa, who dies with glory, having endured pain and humiliation: dramatic literary models, impressively set to music by Franz Liszt. Written at the same time, these works represent Liszt’s ideas striving to unite literature and music, on the one hand modernising Italian opera and on the other advancing towards the symphonic poem in his orchestral writing.

The Sardanapalo manuscript comprises the first act. For 170 years the material lay dormant in the Goethe and Schiller archive in Weimar: it was only in 2017 that David Trippett deciphered, edited and orchestrated the manuscript at the University of Cambridge. Kirill Karabits conducts the Weimar Staatskapelle: Liszt’s orchestra in the city in which he composed the opera. audite continues its series of the great Weimar Kapellmeister-composers.

The torso of Liszt’s Sardanapalo may only last around 50 minutes, but it packs in such a richness of gratification that it is hard to see where the opera would have gone from there...The music rolls together vocal writing like Bellini, rousing choruses similar to early Wagner, wild orchestral sounds out of Berlioz, and even a pre-echo of Massenet.

It is indeed extraordinary… Liszt’s fluid treatment of bel canto structures reveals an assured musical dramatist at work… He makes no concessions to his singers, though, and his vocal writing is taxing in the extreme… The choral singing is consistently strong, the playing terrific, and Karabits conducts with extraordinary passion. Trippett has carefully modelled his orchestration on Liszt’s works of the early 1850s, and it sounds unquestionably authentic.

The music is not short on personality – far from it – but too often seems unsure about what it is trying to do. For the performance there can be only gratitude. Trippett’s instrumentation is bold, truly reflecting the score’s over-exuberance…El-Khoury credibly suggests Mirra’s inner life…Karabits has the gift of turning everything into an occasion, and this Weimar recording is no exception…This important Audite issue is a model of how rare works such as Sardanapalo ought to be presented.

The score is a fascinating, at times disconcerting melange of Italianate and Germanic elements, with long stretches of bel canto melody punctuated by darker, proto-Wagnerian outbursts...El-Khoury does a valiant job, though there’s no disguising that Liszt wasn’t terribly accustomed to writing for the operatic voice...Sardanapalo may be ‘the claw of a lion’ rather than the entire majestic beast (to borrow a phrase from one of Wagner’s letters to Liszt), but it’s definitely worth a visit.

It is rip-roaring stuff, characteristic of the dramatic orchestral narratives of the composer’s neglected tone poems. Karabits conducts his Weimar forces with flair, and the voices of Joyce El-Khoury, limpid as the king’s courtesan, Mirra, Airam Hernandez as a plangent Sardanapalo and Oleksandr Pushniak as the menacing Beleso make a fine case for this rediscovery.

Liszt’s mind, as ever, seems to resemble a vast repository of all the music of the 19th century...It’s rooted in Italian tradition; and yet some of Liszt’s glittering textures seem to look half a century ahead to Richard Strauss. Then, around every corner, there is Wagner…Karabits conducts with pace and purpose, and his singers are strong if not subtle.

Torridly exciting...It is not too big a statement to say that the work’s emergence changes musical history...When El-Khoury’s volatile soprano shoots skywards, wildly dramatic, you wonder what heights were left to breach in the unwritten acts. [Hernández and Pushniak] contribute forcefully, although not as much as Karabits’s orchestra, on excellent form, weighty with piercing brass and thrusting strings.

Rediscovered and reconstructed, Act I of Liszt’s opera Sardanapalo receives an outstanding performance from the Weimar Staatskapelle and Nationaltheater Opera Chorus under Kirill Karabits. Joyce El-Khoury brings her fascinating soprano to bear upon the role of Mirra, arching some spacious phrases with intensity. Airam Hernández brings warmth to the tenor title role, and Oleksandr Pushniak’s bass- baritone provides thunder as Beleso.