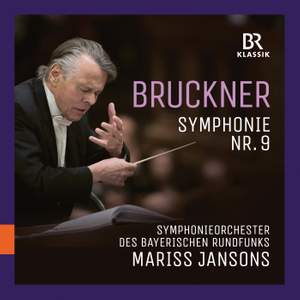 Though scarcely slower than [Jansons’s] earlier reading, and recorded in an ambience combining spaciousness with detailed clarity, the opening has mystery enough. But more striking is how Jansons’s... — BBC Music Magazine, May 2019, (Performance) / (Recording) More…

It seems that the Ninth is a limit. He who wants to go beyond it must pass away. [...] Those who have written a Ninth stood too close to the hereafter.' Arnold Schoenberg wrote those words in reference to Gustav Mahler, who had just died without ever having heard his own Ninth Symphony performed. Bruckner was apparently afraid of the fatal number as well: 'I don’t want to start on my Ninth at all, I don’t dare'. However, very soon after the completion of his Eighth Symphony in September 1887, Bruckner started on his first drafts. Overall, work on the Ninth then dragged on over the long period from 1887 to 1896, having to be constantly interrupted because of the composer’s deteriorating health. Bruckner finally died while working on the fourth movement – and his masterpiece dedicated to 'the beloved God' remained unfinished. Even without a finale, the three-movement torso that survives is, of course, extremely impressive.

Though scarcely slower than [Jansons’s] earlier reading, and recorded in an ambience combining spaciousness with detailed clarity, the opening has mystery enough. But more striking is how Jansons’s ‘long-view’ enables him to project the entire first-subject group as, at once, a single arc and an upbeat to the extended second-subject group…The Bavarian Radio SO responds with weighty string tone and noble sonorities from the eight horns.

Dynamic and tempo markings are observed with a remarkable degree of fidelity and orchestral textures are both warm and revealing of inner detail.

The sound has pleasing clarity notably with regard to the amount of fine detail revealed, especially in the woodwind