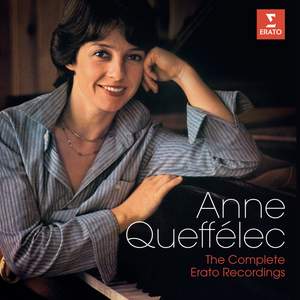 A pianist whose exceptional intelligence and sensitivity draws on her effervescent spirit, Anne Queffélec learned her craft in both Paris and Vienna. Her close relationship with Erato, which dates back to 1970, has produced the rich discography collected on these 21 CDs. In repertoire that ranges from Bach to Dutilleux by way of Scarlatti, Schubert, Satie and Ravel, and which embraces solo works, chamber music and concertos, Queffélec is consistently notable for her insight and eloquence.

The French pianist Anne Queffélec, who turned 70 this year, enjoys a long-established international reputation. It has been enhanced over the years by her productive relationship with Erato, which was launched with a Scarlatti recital in 1970 and with Virgin Classics, now also Erato with Satie in 1988 which has been huge best seller!

Queffélec trained in both Paris and Vienna and this 21CD box showcases her in repertoire which, comprising solo works, chamber music and concertos, ranges from the early 18th to the late 20th century.

Gramophone magazine has described her recordings as “Delicious playing”, “Outstanding … thoughtful, poetic”, “Articulate, clear-textured and vivacious, this is commendable”, “[Satie] No pianist understands the atmosphere of this music or can sharpen its wit more tellingly than Anne Queffélec” Anne Queffélec comes from a distinguished literary family – her father, Henri, was a writer and her brother, Yann, is a prize-winning novelist. This

background is evident in the eloquent personal note that she has contributed to this edition which provides illuminating insight into her experiences as a pianist.

Numerous First global releases on CD: Schubert (CD2), Chopin (CD3) Mendelssohn (CD7), Haydn Concerto No. 4 (CD 15). These have been, among other recordings, remastered in 24bit/96kHz from the original tapes.