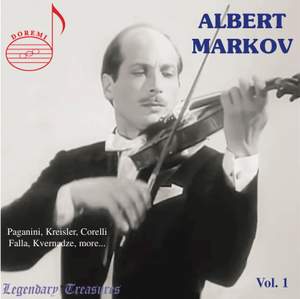 As captured between 1956 and 1963 for Melodiya, Albert Markov’s quicksilver virtuosity dazzles in a wide range of repertoire, most invaluably in concerto rarities by Kvernadze and Erkin. — BBC Music Magazine, February 2019, 5 out of 5 stars More…

The great Russian American violinist Albert Markov was born in 1933 in Kharkov, Ukraine. Among his teachers was Yuri Yankelevich (1909-1973) who was the teacher of other leading violinists, among them Leonid Kogan, Vladimir Spivakov, Nelli Shkolnikova and Victor Tretyakov. Markov was the second prize winner at the 1959 International Queen Elisabeth Violin Competition in Brussels, the year that Jamie Laredo was the first and Joseph Silverstein was the third. Following his winning, Markov embarked on an extensive solo career and in 1975, emigrated to the USA. He has appeared as soloist with many leading orchestras under such conductors as Gennady Rozhdestvensky, Kurt Sanderling, Kirill Kondrashin, James Conlon, Neeme Jarvi, David Zinman, Andrew Litton, Lukas Foss, Sixten Ehrling, Kazuyoshi Akiyama, Sergiu Comissiona and Sir Charles Groves. Albert Markov is an outstanding musician, praised by critics around the world for his beautifully warm silky tone and for his dazzling virtuosity. He is also a noted composer of many works for violin, violin and orchestra, chamber works, one symphony and three operas. Markov’s son, Alexander Markov, is also a well-known virtuoso violinist and the two have frequently appeared together. In recent years, Albert Markov has also become a highly respected violin pedagog. He published several violin instruction and performing analysis books. Since 1981 he has taught in the Manhattan School of Music. The items on the set are taken from Albert Markov’s Melodiya recordings made in the late 1950’s and early 1960’s.

As captured between 1956 and 1963 for Melodiya, Albert Markov’s quicksilver virtuosity dazzles in a wide range of repertoire, most invaluably in concerto rarities by Kvernadze and Erkin.

Throughout the course of these two very full discs one can hardly fail to be impressed both by his questing attitude to new repertoire and by his communicative bravura in more standard fare.