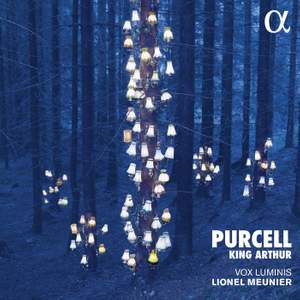 This King Arthur is a giddy triumph for its artists. Blazing their way through the score, the performers set a new benchmark, delivering a production that’s equally gutsy and gorgeous…Dance meters... — BBC Music Magazine, February 2019, 5 out of 5 stars More…

Act II: "How Blest Are Shepherds"

Act III: "What Ho! Thou Genius of This Isle"

Act III: "What Power Art Thou"

Act III: "No Part of My Dominion Shall Be Waste"

Act III: "See We Assemble Thy Tevels to Hold"

Act IV: "In Vain Are Our Graces"

Act V: "Saint George, the Patron of Our Isle"

Vox Luminis already boasts an impressive discography, orientated mainly towards sacred music and German repertoire (its CD devoted to music by Heinrich Schütz won the Gramophone ‘Best Recording of the Year’ Award in 2013). Now this ensemble, founded nearly fifteen years ago by Lionel Meunier, has scaled one of the summits of English music: the legend of King Arthur and his mentor the wizard Merlin inspired one of Henry Purcell’s most popular successes, King Arthur, a semi-opera on which Purcell lavished all his exuberant musical and theatrical inventiveness.

In this revelatory new reading, the Vox Luminis vocal sound always perfectly matches the mix of choruses and highly characterized vocal solos. Prior to recording, the group presented the work in many semi-staged concerts, notably in Britain, where this Franco-Belgian ensemble has enjoyed enormous success, becoming one of the most respected European ambassadors for baroque music-making.

This King Arthur is a giddy triumph for its artists. Blazing their way through the score, the performers set a new benchmark, delivering a production that’s equally gutsy and gorgeous…Dance meters swing, and grand choruses are crisp and alluring. Amorous ensembles ooze passion, with guest soprano Sophie Junker irresistible as Cupid…Director Lionel Meunier is the real star, with a soaring vision of Purcell’s music in a class of its own.

Delightfully fresh and subtle in its musicianship. By and large English performers prefer a more rumbustious take on Purcell, but Meunier’s lighter touch is well judged. Some other recordings feature more obviously starry singers, but Vox Luminis fields a likeable array of mostly light, period voices, who live up to the enchantment of their setting. Purcell’s music is so irrepressibly tuneful and imaginative. How could anybody go wrong?

[Vox Luminis] harvest the fruits of Purcell and Dryden’s collaborative imagination with affectionate lucidity. The band never sounds as small as it actually is…The playing has admirable finesse… The Saxons’ heathen sacrifices in Act 1 flow with unerring pacing and harmonic shaping…It has been decades since a recording of any of Purcell’s operas as enjoyable as this.

[Vox Luminis’s] main strength likes in the capability of all its members to step forward as soloists. This works particularly well in a work like King Arthur with its many small cameo roles…But it is the fine ensemble, precise chording and articulation in the ensembles and choruses that are the chief glory of the performance, the use of Francophone singers if anything accentuating the clarity of diction. Among the soloists the sweetly-voiced high tenor Olivier Berten steals the honours.