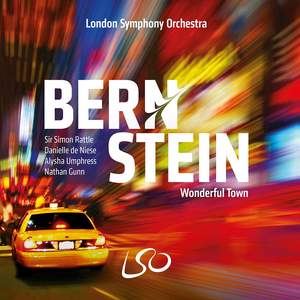 Rattle obviously adores the score and in broad terms he certainly enters into its spirit…but there’s just a slight touch of restrain about the whole enterprise; it’s all a bit too tasteful…The... — Opera, May 2019 More…

Watch our exclusive video-interview with the London Symphony Orchestra's Music Director about their live recording of Bernstein's raucous paean to The City That Never Sleeps, out now on the orchestra's own label.

Sir Simon Rattle and the London Symphony Orchestra pay homage to Leonard Bernstein with a recording of Wonderful Town that captures the energy and excitement of sold-out performances from December 2017. Featuring an all-star cast led by Danielle de Niese and Alysha Umphress, this release coincides with worldwide #BernsteinAt100 celebrations marking the centenary of the Orchestra’s former President.

Bernstein’s five-time Tony award-winning musical follows sisters Ruth and Eileen on their quest to make it big, pursuing careers in writing and acting from their cramped basement apartment in New York’s bohemian Greenwich Village. Fresh from rural Ohio, the sisters end up getting more than they bargained for, realising that life in the Big Apple is not as glamorous as it may seem.

A bright and cheery love letter to the city that never sleeps and the colourful characters inhabiting it, Wonderful Town draws on Fields and Chodorov’s 1940 play My Sister Eileen, which itself is based on a series of autobiographical short stories by the ‘real-life’ Ruth McKenney.

Bernstein’s infectious score includes classic numbers such as ‘Ohio’, ‘One Hundred Easy Ways’, and ‘A Little Bit in Love’, as well as a riotous conga that had delighted audiences dancing in the aisles of the Barbican hall. The digital version of the album will include an additional version of Conga!’, featuring audience participation, as a bonus track.

‘I cannot imagine better casting for the sisters than the quintessentially sassy Danielle de Niese and the effortlessly funny Alysha Umphress.’

Rattle obviously adores the score and in broad terms he certainly enters into its spirit…but there’s just a slight touch of restrain about the whole enterprise; it’s all a bit too tasteful…The score is regularly classy, containing many good things, and this cast offers plenty of strengths…De Niese shines in ‘A Little Bit in Love’, which suits her perfectly.

The standout performer is Alysha Umphress as Ruth: she brings oodles of no-nonsense sassiness to arguably the show’s best-known number, One Hundred Easy Ways to Lose a Man...There’s no doubting the quality that the LSO brings to the performance either, including a gleefully cheeky ensemble of saxophones, a string section sparkling with Broadway pizzazz, and trumpets who in the Ballet at the Village Vortex display some of the most satisfyingly filthy vibrato that I can recall hearing.