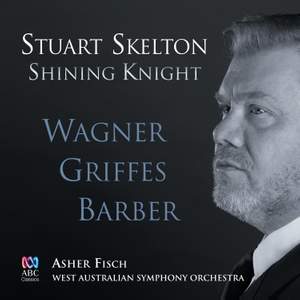 He’s in fine voice throughout, his tone shining and bronzed, his dynamic control often immaculate. Rienzi’s prayer is gloriously bel canto, as it should be…Fisch and his West Australian Symphony... — Gramophone Magazine, October 2018 More…

1. The Lament Of Ian The Proud

2. Thy Dark Eyes To Mine

3. The Rose Of The Night

The Australian tenor (currently singing Siegmund in the Royal Opera House's Ring Cycle) talks to Katherine about his career as a Wagnerian and his debut solo recording Shining Knight, recently released on ABC Classics.

Read our exclusive interview with Stuart Skelton about the recording here.

Stuart Skelton, one of the world’s leading tenors and Wagnerians releases his debut solo recording Shining Knight on ABC Classics.

Performing with the West Australian Symphony Orchestra conducted by Asher Fisch, Shining Knight features arias from many of the roles that have become synonymous with Stuart Skelton – Parsifal, Lohengrin, Siegmund – as well as Lieder and other songs from beyond the operatic repertoire.

Stuart Skelton has long been acclaimed as one of the greatest heldentenors of his generation, at the peak of his powers, receiving extraordinary reviews for his performances in some of opera’s most demanding roles. Coupled with his outstanding musicianship and interpretive abilities, Skelton has performed all over the world, from the Sydney Opera House to New York’s Metropolitan Opera, the Paris Opera, the Bavarian State Opera, the English National Opera, the Royal Opera Covent Garden and Milan’s La Scala.

The disc begins with one of Wagner’s earliest works, Rienzi, and traces the composer’s development as he invents a new musical language in his Ring cycle, his great operas Parsifal and Tristan und Isolde, and then to the Wesendonck Lieder that foreshadows so much of his later work. Skelton then turns to America, and two composers from the generation inspired by Wagner: Charles Griffes and Samuel Barber.

He’s in fine voice throughout, his tone shining and bronzed, his dynamic control often immaculate. Rienzi’s prayer is gloriously bel canto, as it should be…Fisch and his West Australian Symphony Orchestra are finely alert throughout to the ebb and flow of Wagner’s music…The songs by Griffes and Barber are tremendous. Skelton clearly loves this music, and his voice blazes with conviction…It’s a fine recital that leaves you wanting more – of Skelton singing Griffes, perhaps, above all.

Throughout, Skelton’s vocalism maintains the same basic qualities: ease of production, clean, bright tone founded on an essential and flawless lyricism; and each and every syllable clear…[Fisch] helps his players achieve a constant sense of movement, their tone combining refinements with a lush quality. An inner light shines through the lucid textures of the Lohengrin extract.

His Siegmund (Die Walküre) is well known, but the excerpts from Lohengrin and Parsifal offer a rare kind of Heldentenor singing: poetic but heroic. His Wesendonck Lieder make a strong case for a male singer, with the sheer healthiness of his ringing tone.

Few tenors have the particular combination of weight throughout the range, with ringing top notes and baritonal strength, required for Wagner’s heroic roles. Skelton is emphatically one...The Wesendonck Lieder allow him ample scope for lyricism and some magical pianissimi.

Skelton’s voice is in pretty fine fettle, although you might wish he had deployed a wider colour range, especially when some of his gentler tones are so beautiful. Take, for instance, the word taube (dove), tenderly uttered in the grail narration from Lohengrin...The West Australian Symphony Orchestra, conducted by Asher Fisch, provide pleasures of their own.

Although this solo recording from Stuart Skelton is long overdue, it’s entirely worth the wait, I’m happy to report. The unique qualities of his instrument are all here: the thrilling top, the power to spare, the luxurious timbre. Plus he’s in happy, inspired partnership with the brilliant West Australian Symphony Orchestra, led by its marvellous Principal Conductor Asher Fisch. What more could one wish for?