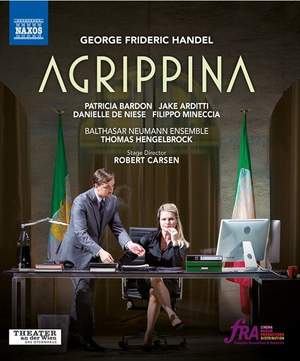 Carsen’s production…is a paradox that is simultaneously sophisticated and clumsy…On the other hand, [he] presents characters, their interactions and motivations with cleverness, wit and flawless... — Gramophone Magazine, October 2018 More…

During his years in Italy, Handel absorbed the music of his contemporaries and mastered new stylistic trends. Though the staging of La resurrezione was a memorable event in the Roman musical world, it was the production of Agrippina that marked Handel’s definitive investiture as an operatic composer. It met with enormous success and an unprecedented number of performances followed. Its melodic power is overwhelming and in his creation of credible and vivid characters, the alternation of recitative and arias, and sheer theatrical power, Handel established the template that was to last for the remainder of his operatic career.

Carsen’s production…is a paradox that is simultaneously sophisticated and clumsy…On the other hand, [he] presents characters, their interactions and motivations with cleverness, wit and flawless timing…Hengelbrock’s full-blooded conducting of the Balthasar Neumann Ensemble has theatrical acumen and is vividly sonorous whether sweet, dark, seductive or furious.

Hengelbrock amply motivates the score, his regular orchestra providing constantly brisk and assertive playing…Carsen relishes the cynicism of the text…In her vividly sung performance as Nerone’s doting mother Agrippina, Patricia Bardon is every inch the master-manipulator…Enhanced by a fresh and immediate vocal performance, Danielle de Niese’s perfectly judged Poppea portrays a smart little cookie determined to use whatever nature has given her to further her ends.