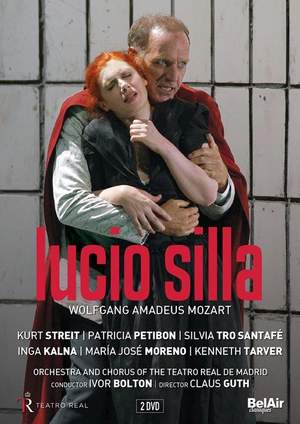 Streit is good at acting the tyrant, a blend of arbitrary power and remorse…but under pressure his tone things out. Silvia Tro Santafé is a dependable Cecilio. But the vocal laurels, and the... — BBC Music Magazine, October 2018, 5 out of 5 stars/4 out of 5 stars More…

Mozart was not yet seventeen when Lucio Silla was created in Milan one December evening of 1772, yet we can still identify some of the elements that established the exceptionally-gifted child musician as the greatest composer of all times. Indeed, with Lucio Silla, although a neoclassical 'opera seria' in every way, it seems that Mozart was already learning to deconstruct and to free the traditional forms of musical drama from archaic conventions. The opera is centered around the love that Roman dictator Lucio Silla bears for his enemy's daughter Giunia, who favours the exiled senator Cecilio. After many twists and turns, the lovers are united in marriage and Silla renounces his crown. Tenor Kurt Streit is Lucio Silla, and soprano Patricia Petibon is Giunia for the last time, after having gained international recognition thanks to her numerous performances in this role, while mezzo-soprano Silvia Tro Santafe is the ardent Cecilio. In this monumental production, Claus Guth finds a way to respect both the classical setting and the formal innovations that make the opera so interesting. Ivor Bolton conducts the Orchestra and Chorus of the Teatro Real.

Streit is good at acting the tyrant, a blend of arbitrary power and remorse…but under pressure his tone things out. Silvia Tro Santafé is a dependable Cecilio. But the vocal laurels, and the principal reason for recommending this recording, belong to Patricia Petibon who tears into Giunia’s arias as if her really depended on it.

It’s a fascinating and demanding production, for the viewer as well as, clearly, the performers. In the title-role, Kurt Streit, a distinguished Mozartian who’s turned in recent years to heavier roles, is compelling, the voice’s sweetness now mixed with an extra stern virility…Anyone interested in the drama of this early Mozart opera seria should seek out Guth’s fascinating staging.