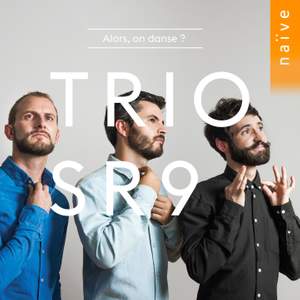 For their second album on Naïve, the three percussionists (marimba players) of Trio SR9 have chosen to shine the light on the theme of dance, in all its rich variety throughout the history of Western classical music: from Rameau and Bach, to Debussy, Satie and Borodin.

So, shall we dance?

The first part of the album is a set of Baroque dances (Gavotte, Sarabande, Minuet, Gigue...) drawn from the legacy of various European composers. These pieces are presented in the form of a large suite, as was the tradition at the time.

Then we move on to explore Europe of the nineteenth century. A taste for exoticism and folk dance rhythms are here made even more sublime by Claude Debussy with his Tarentelle Styrienne, Béla Bartok with the Romanian Dances and Alexander Borodin with his Polovtsian Dances.

The last part of the disc is dedicated to the mysticism of dance and begins, perhaps unsurprisingly, with the Ritual Fire Dance by Manuel de Falla. It is followed by Narnchygäer, a new work for three marimbas and the first of its kind composed by François Tashdjian especially for the SR9 Trio.

Lastly, it is around the three Danse de Travers by Erik Satie that this programme is weaved. This common thread punctuates each part of the album with sweetness and melancholy.

After a highly-regarded first album, Bach on the marimba, this new programme allows us to go one step further in revealing the many riches of the marimba, the sumptuously-crafted five-octave rosewood instrument. It's via the sound of three marimbas that the Trio SR9 demonstrates its ability to develop the reputation of percussion, all in one choreographed gesture …