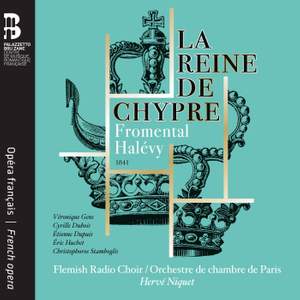 Gens’s warm voice and intelligent pacing lend lustre to the only female role and the male singers, too, are generally easy on the ear. — BBC Music Magazine, August 2018, 3 out of 5 stars More…

Berlioz wrote of Halévy’s La Reine de Chypre (1841): ‘Its success will at least equal that of La Juive. And Wagner added: ‘It is in La Reine de Chypre that Halévy’s new style has appeared with the most brilliance and success.’ So several voices – and those by no means insignificant – have declared this work, written six years after La Juive, to be its composer’s masterpiece. Premiered on 22 December 1841, Halévy’s opera offered the limelight to Rosine Stoltz in the title role: she was the only woman in the cast, for it had been found preferable to isolate her, following her incessant disputes with the other female singers in the company. Alongside her, the tenor Gilbert Duprez shone in the role of Gérard. The story takes the spectator on a voyage from the palaces of Venice to those of Cyprus. But despite an initial success confirmed by several translations and adaptations that appeared shortly after the first run (notably Lachner’s Caterina Cornaro in 1841 and Donizetti’s in 1843), the work gradually vanished from European opera houses.

Gens’s warm voice and intelligent pacing lend lustre to the only female role and the male singers, too, are generally easy on the ear.

The Palazzetto Bru Zane has done Halévy’s reputation an enormous service by presenting this splendidly cast recording in a new edition painstakingly assembled by Volker Tosta… Gens, in superb voice, is dramatically convincing throughout, as though she were in a staged performance. Cyrille Dubois is equally magnificent as Gérard… Chorus, orchestra and Hervé Niquet’s conducting are exemplary. An absolutely thrilling recording

Gens is once again PBZ’s choice of heroine; her sheer distinction – poise and eloquence of tone, line and characterisation, subtle feeling for verbal nuance and control of dynamics – seems here more remarkable than ever…Dupuis may lack full maturity of timbre, but the voice is a fine one, noble of tone and free in movement, and comes notably into its own in the character’s final scenes.

The memorable melodies never stop flowing in this 1841 grand opera, which shares more than its Venetian-Cypriot setting with Verdi’s Otello (the Machiavellian senator Mocénigo is surely second cousin to Iago). Gens, as ever, is in her element in tragedienne mode (though for once she’s portraying a heroine who comes up smelling of roses), but the star performance comes from French tenor Cyrille Dubois, who tackles the stratospheric role of Gérard with mellifluous sweetness and élan.