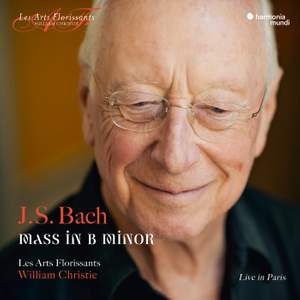 This account was recorded ‘live’ at the Paris Philharmonie and there’s a sheen of polished spontaneity to it… Tempos are brisk and breezy…and Christie puts the ballet shoes on Bach, so that the... — BBC Music Magazine, May 2018, 4 out of 5 stars More…

Christoph Wolff tells us that Bach wrote this work as a summing-up of his entire life. It is his testament, his epitaph, a legacy to those who would follow him. He chose the Latin Mass, the oldest and most universal form of Christian worship as his model. The B-Minor Mass is a profoundly religious work. However he desires to give us a panorama of his art – secular as well as sacred. Bach is conspicuously absent in the most secular music of the baroque world-opera. Yet in his cantatas, his oratorios and even his masses, he draws on the operatic, lyric repertory of his German, Italian and French predecessors and contemporaries. Stupendous, intellectually complex counterpoint which is the main architecture of the B-Minor Mass is thus punctuated by a collection of soli and duetti, whose styles are decidedly secular, inspired by composers such as Telemann, Hasse, Marcello, Stradella as well as Lully and French composers of the early 18th century.

Bach himself conducted from the keyboard, sometimes beating time in the larger movements. Otherwise he played along with his fellow musicians, realizing the continuo baseline. And so do I ! I am a continuo player, harpsichordist and organist who thus participate in the joy of music making. Yes I conduct the great Kyrie which begins the mass. However in the second movement, the Christe, I am at the keyboard accompanying a light-hearted duo for two treble voices. I play rather than direct in nine movements of the mass out of twenty-six. My role as a performer-conductor has a number of important musical consequences. First of all the number of players: I formed an orchestra and a chorus of modest proportions. Fewer musicians as well as the absence of a conductor creates an atmosphere of chamber music, giving an independence and a freedom to both soloists and instrumentalists.

Another consequence and most important is that of tempo. Bach’s mass has been performed since the beginning of the Bach Revival 50 years ago and has much in common with the way Handel’s oratorios were performed in the past. One only has to listen to a number of recordings past and present to detect the problem – exaggeratedly slow tempi played and sung by an exaggeratedly large number of musicians – it is as if serious and religious sentiments were synonymous with slowness. My tempi are brisk, not only in the soli and the duetti but in the D major trumpet choruses as well. Quicker tempi suggest a more physical and dance-like approach to the music. I should conclude by saying that my goal in this recording is to show a human side of Bach’s art. Indeed, the B-Minor Mass is an affirmation of Christian faith but just as important, for a secular society of today, it is a powerful affirmation of humanism, the exaltation of man and his achievements. - William Christie

This account was recorded ‘live’ at the Paris Philharmonie and there’s a sheen of polished spontaneity to it… Tempos are brisk and breezy…and Christie puts the ballet shoes on Bach, so that the work’s pervasive dance rhythms lilt and skip to joyous effect…Christie’s goal in all this is ‘to show a human side to Bach’s art’, and he certainly achieves his intention in a performance that melds affection with humility.

There are things to admire and enjoy in this performance – not least the many fine solo instrumental contributions and in particular horn player Anneke Scott’s distinctive contribution to the ‘Quoniam’ – but there is a certain interpretive blandness from Christie in many of the D major choruses. Chorally, he’s at his best in the slower items, with the ‘Crucifixus’ standing out for its depiction of the drama – one can almost hear the nails being driven in. The solo items are generally managed with greater ease. Christie opts, slightly unexpectedly, for four rather than five soloists; all make eloquent contributions, with Tim Mead especially affecting in the Agnus Dei.

The sophisticated landscape of Les Arts Florissants is drawn expressly from Christie’s ‘affirmation of humanism’, as he puts it, and therefore the elegant, abstract lines heard from the outset of the Kyrie...are of far greater interest to him than an intensity born of the German-speaking rhetorical gesture of the cantata world, a bitingly graphic ‘Crucifixus’ aside.

There’s a subtle but unmistakable French accent to some of Christie’s upbeats and cadences...and he follows the composer’s lead in flitting between the podium and keyboard...It adds to the intimate, chamber-music atmosphere of an interpretation which is refreshingly non-interventionist: the overall impression is of the music simply being given space to unfold in all its glory.

Both tinglingly exciting and deeply moving. Crisply articulated yet sonorous orchestral playing and choral singing help to achieve clarity within even the most exuberantly complex textures, while the soloists bring a welcome freshness

At first the approach seems almost too light-toned and ethereal, but soon the intimacy of these modest forces – a chorus of fewer than two dozen, with an orchestra of around the same size – takes an ineluctable grip. Textures are clear, tempi brisk – the Sanctus positively skips.