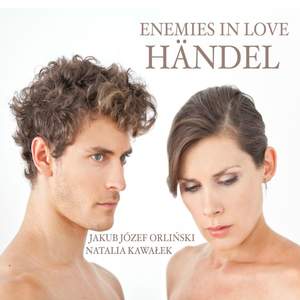 He begins with Tamerlano’s neurotic “A dispetto”, a furious bravura showstopper that he dispatches with aplomb, flaunting venomous “chest” notes. This voice is one of spellbinding beauty...His... — Sunday Times, 25th March 2018 More…

The album explores themes of love, jealousy, war, intrigue and religious conflict. The singers delight the listener with their virtuosic display, as one would expect from a recording from Evoe, a label specialising in vocal and orchestral Baroque music.

Polish countertenor Jakub Jozef Orlinski has gained a reputation as a singer of striking vocal beauty and daring stage craft. Trained at The Juilliard School, he is an avid interpreter of the roles created by Handel. Polish mezzo-soprano, Natalia Kawalek, studied at the Frederic Chopin University of Music in Warsaw. In the summer of 2016 she made her debut in Glyndenbourne singing Cherubino in Le Nozze di Figaro of Mozart. In 2016 she sang also in Verdi’s Macbeth, together with Placido Domingo in Theater an der Wien. In 2017 she sang in Teatr Wielki in Warsaw being part of the Korngold Die Tote Stadt opera production staged by M.Trelinski.

He begins with Tamerlano’s neurotic “A dispetto”, a furious bravura showstopper that he dispatches with aplomb, flaunting venomous “chest” notes. This voice is one of spellbinding beauty...His boyish timbre is darkened with rich androgynous accents...Orlinski is a star in the making, no doubt.