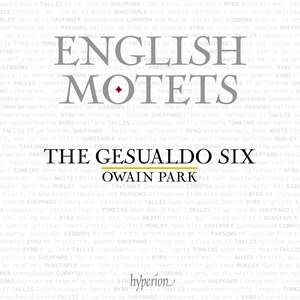 The line-up might play safe, but it’s all exquisitely done, collegiate smoothness and blend to the fore. And what blend! The harmonic voicing is immaculate yet always sensitive to the imperatives... — BBC Music Magazine, June 2018, 5 out of 5 stars More…

Parsons, R: Deliver me from mine enemies

Conductor Owain Park talks to David about his recent album of English Tudor gems with the Gesualdo Six.

The versatile Owain Park adds another two roles—those of singer and director—to his burgeoning Hyperion discography, while The Gesualdo Six make their label debut. Their programme of motets ranges widely across the religious musical landcsapes of medieval and Tudor England.

The line-up might play safe, but it’s all exquisitely done, collegiate smoothness and blend to the fore. And what blend! The harmonic voicing is immaculate yet always sensitive to the imperatives of the polyphonic flow…Weavers of rich and plangent aural tapestries, the Gesualdo Six meld style and substance with beguiling sure-footedness. An auspicious debut.

Multi-talented musician Owain Park sings with and directs his male-voice consort in an impressive showcase of English polyphony by Byrd, Tomkins, Sheppard, White, Dunstaple, Morley, Taverner, Cornysh, Gibbons, and Parsons et al, including Tallis’s penitential wonder, Suscipe quaeso. Their rich, warm blend and finely honed phrasing create glowing beauty in viscerally spiritual responses to the texts. Their ardour is occasionally excessive with romantically over-stretched tempi discomforting to the ear: just because you can sing that slowly doesn’t mean you should! Daringly deep or drowned in ambition? Whatever one thinks, this is an admirable demonstration of ensemble expertise and total commitment.

Sung with precision, perfect balance and glowing warmth under the direction of Owain Park. Byrd’s Vigilate is delivered with suitably vital urgency, while Sheppard’s Libera nos, salva nos I unfolds with quiet, stately grandeur. This is singing at its most contained and intimate.