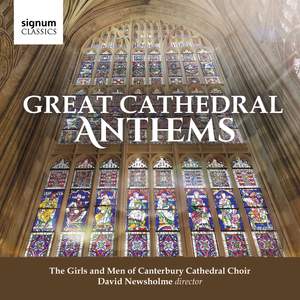 Croft: We Will Rejoice In Thy Salvation

Boyce: O where shall wisdom be found?

Leighton: Let all the world in every corner sing

Drawing international media attention following their founding in 2014, the Girls' Choir of Canterbury Cathedral has quickly become a leading light in the landscape of british choral music For their first recording with Signum - led by their director David Newsholme - they draw on the rich catalogue of british catherdral anthems from the 16th to 20th centuries, performing works but composers including Tallis, Byrd, Stanford, Parry and Howells.

They are joined on this recording by the Men of Canterbury Cathedral Choir, as well as organists Aidan Bawtree and Nicholas Wearne.