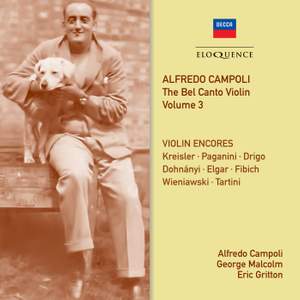 Treasurable performances, brimming with personality, tonally immaculate and powered by a sensitivity to emotional narrative to have the listeners hanging onto Alfredo Campoli’s every phrase. — BBC Music Magazine, May 2018, 5 out of 5 stars

Gardner, Samuel: From the Canebrake

Tartini: Variations on a Theme of Corelli

One of the most significant violinists in gramophone history, Alfredo Campoli enjoyed tremendous success in the 1930s as a purveyor of light music, both in concerts with his own salon orchestra and on Decca. A series of six 2CD reissues from Eloquence focuses on the violinist’s postwar reinvention of himself as ‘Campoli’, the classical soloist.

Nonetheless, Campoli retained a popular touch, and an innate feeling for light-hearted music, which lends both grace and distinction to this anthology of encores, miniatures and trifles. The second disc reproduces an album conceived and released by Decca in February 1955 as an 80 th -anniversary tribute from Campoli to the man who was in many ways his artistic forefather, Fritz Kreisler. Both violinists were equally at home in the café as the concert hall; both could charm the birds from the trees with the brilliance of their technique but also the natural, beguiling warmth of their expression which seemed to reflect a special generosity of spirit. It is no coincidence that Campoli became so sympathetic interpreter of the Violin Concerto which Elgar had dedicated to Kreisler.

The Kreisler album is complemented here by a first international CD release on Decca for three 10” LPs. Three Paganini showpieces and three Dohnányi works arranged by Kreisler were recorded in April 1953 and released in the autumn; in December of that year, Campoli went on to make an acclaimed debut at Carnegie Hall. Two medium-play discs of encores were then recorded in December 1954 and January 1956, both with the violinist’s principal accompanist, Eric Gritton.

All the recordings in this series of ‘Alfredo Campoli: The Bel Canto Violin’ have been given new remasterings from original Decca sources. Invaluable context on both artist and repertoire is provided by new booklet essays from Campoli’s biographer David Tunley.

‘Mr Campoli’s playing of the Ruralia Hungarica and the Paganini is brilliant and sure, without the excesses that so often accompany display pieces. The violin tone is warm, with a very satisfying balance between piano and violin.’ High Fidelity, January-February 1954

‘Here is something wonderful and unique … Campoli has excelled himself … The result is a disc of rare beauty; one that should on no account be missed’ Gramophone, March 1955 (Kreisler) ‘Campoli could play this music in his sleep … He combines a knowledge of such pieces with a matured classical technique as does no other violinist I can think of, and […] he plays the music with sympathy and affection and immense skill. Eric Gritton accompanies with customary care, and the recording is very good indeed.’ Gramophone, November 1955 (Elgar, Drdla)

Treasurable performances, brimming with personality, tonally immaculate and powered by a sensitivity to emotional narrative to have the listeners hanging onto Alfredo Campoli’s every phrase.