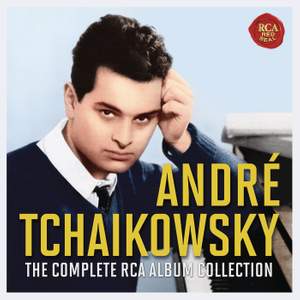 First ever release of André Tchaikowsky’s complete RCA recordings in a 4CD collection. The set includes Tchaikowsky’s debut LP recording remastered for the first time on CD. This recording features Ravel’s Gaspard de la Nuit which Tchaikowsky performed at the Queen Elizabeth Competition in 1956 (for which he was awarded third prize). Tchaikowsky recorded this album during an extremely busy performing schedule following the Competition. It was subsequently reviewed by Gramaphone & Tchaikowsky was praised as “a thoroughly musical player, and he plays with great concentration & intensity.” Discs 2-4 predominantly focus on the works of Mozart and Chopin – two composers with which Tchaikowsky’s experienced an undeniable affinity. These recordings reconfirm Tchaikowsky’s distinct personality & idiosyncratic artistic voice. Owing to Tchaikowsky’s early death at 46, he never fully enjoyed an international career. However, these albums afford the listener a fantastic insight into this prodigious talent’s early years on the concert platform.