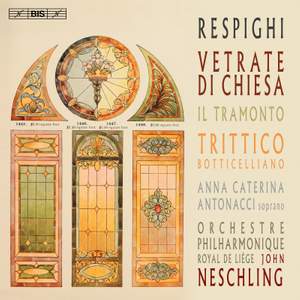 What a glorious work, and what a find! Anyone inured to Respighi’s gaudy colours and thumping rhythms will be astonished by the musical and emotional range of this economical score. Neschling,... — MusicWeb International, December 2017 More…

I. La fuga in Egitto

Recording of the Week,  Respighi from John Neschling and the Orchestre Philharmonique de Liège

In their acclaimed series of Ottorino Respighi’s orchestral music, John Neschling and Orchestre Philharmonique Royal de Liège have transported listeners to destinations as diverse as Brazil (Impressione brasiliane) and King Solomon’s Jerusalem (Belkis, Regina di Saba) as well as giving a thrilling account of the composer’s monumental Sinfonia drammatica – a score of epic proportions for a correspondingly large-scale orchestra. That performance earned a Critic’s Choice in American Record Guide and an ‘Empfehlung’ on German website Klassik-Heute.de, and throughout the series Neschling and his team have received high praise for incisive interpretations and luxurious playing. The present disc brings together three of Respighi’s more popular works, besides the perennial Roman trilogy. Scored for small orchestra, his Botticellian Triptych has all the freshness of the famous paintings of the Renaissance master: Spring, Adoration of the Magi and Birth of Venus. Subtitled ‘poemetto lirico’ Il tramonto was originally composed for voice and string quartet, but is often performed with a larger complement of strings, as here. Soprano Anna Caterina Antonacci breathes impassioned life into Shelley’s Romantic poem The Sunset (translated into Italian) in which love is brutally cut short by death. The disc closes with the four Church Windows, three of which originated as piano preludes based on Gregorian themes. In 1925 Respighi composed a fourth companion piece, and recast the set as a suite for orchestra. Only then did he give titles to the movements, so that his lavishly orchestrated windows are in fact imaginary scenes, rather than any existing church windows.

What a glorious work, and what a find! Anyone inured to Respighi’s gaudy colours and thumping rhythms will be astonished by the musical and emotional range of this economical score. Neschling, his committed players and a radiant soloist whose bel canto experience is invaluable here, do the composer proud. The highpoint of Neschling’s cycle thus far; the rarely heard Il tramonto is a real find.