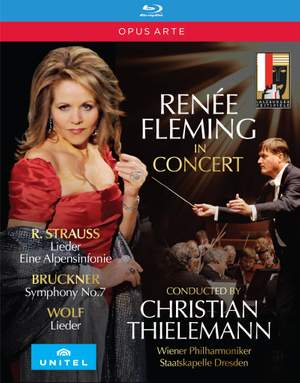 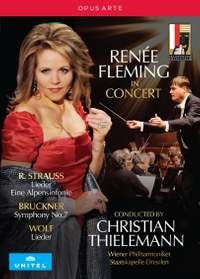 Two unforgettable evenings showcase the artistry of Renée Fleming alongside Christian Thielemann’s mastery of the Austro-German Romantic idiom. The Salzburg Festival honours one of its founding fathers, Richard Strauss, and the Staatskapelle Dresden draws on the deep well of its living Bruckner tradition. The mixed vocal and symphonic programmes feature five lieder by the prolific songsmith Hugo Wolf in addition to four of Strauss’s finest, and an opera scene featuring Fleming in one of her career-defining roles, Arabella. At Dresden’s Semperoper, the Staatskapelle’s then newly appointed music director leads them in Bruckner’s lyric Seventh in which the composer mourns the death of Wagner, whereas in Salzburg, Thielemann helms the Vienna Philharmonic Orchestra for the spectacular mountain journey of Strauss’s titanic Alpine Symphony.