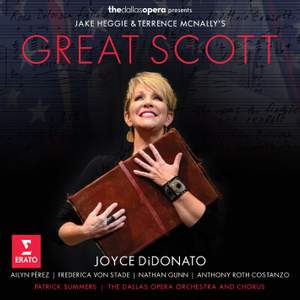 Orchestra and Chorus of The Dallas Opera, Patrick Summers

A cast full of leading American singers and impressive company forces under Patrick Summers give this amiable if slight entertainment a strong launch…Though there’s a good deal of audience noise... — BBC Music Magazine, May 2018, 4 out of 5 stars More…

"Talk to me about Roane, Winnie" (Eric, Winnie, Roane)

"The writing's on the wall" (Roane, Eric)

"What are the Grizzlies' chances?" (Wendell, Anthony, Winnie)

"All that you leave behind" (Arden, Bazzetti)

"Arden! You're not dressed for the mad scene!" (Roane, Arden)

In the Wings (Anthony, Wendell)

Jake Heggie, who has been described as US opera’s most successful composer, chose the celebrated playwright Terence McNally as his librettist for Great Scott. The two previously collaborated on the gripping Dead Man Walking, which has become something of a modern classic since its premiere in 2000. Joyce DiDonato first performed its central role, Sister Helen Prejean, at New York City Opera in 2002 and will do so again in concert stagings in London and Madrid in January/February 2018, coinciding with the album release of Great Scott.

A cast full of leading American singers and impressive company forces under Patrick Summers give this amiable if slight entertainment a strong launch…Though there’s a good deal of audience noise it’s the healthy sound of laughter.

There’s a cunning (and witty) interplay of ideas at work here...Heggie gets to spoof the sub-Rossinian bel canto on an elaborate scale...but in so doing manages to transcend mere pastiche in the creation of genuinely elegant and beautiful lines and authentic vocal fireworks that challenge and tax DiDonato as surely as the roles in her core repertoire.

The works shows Heggie to be an immensely capable writer of pastiche…And here’s the big surprise: this pastiche is more successful than the ‘soft’ contemporaneity of the enclosing musico-dramatic narrative…The singing is exceptionally fine…With a controlled performance of grace, clarity and style, DiDonato is a marvellous Arden Scott…Pérez is more than just sensual and athletic: she scintillates, and her coloratura passages are thrilling.. Von Stade, her voice wonderfully textured, is a joy as Winnie, the company director.

I couldn’t stop smiling at the musical jokes which abound in this warm, witty opera-about-opera (shades of Ariadne auf Naxos in the conceit!) which sees Joyce DiDonato’s fictional diva Arden Scott returning to her home-town to resurrect a bel canto opera worthy of her real-life Stella di Napoli album. To quote Oklahoma!, ‘plenty of heart and plenty of hope!’.

[Heggie's] gift for creative partnerships is supreme...The conceit gets DiDonato singing watery pastiche Bellini, scaling coloratura flights, surviving a mad scene and crooning in velvet; all pleasing to hear...Aside from DiDonato, Nathan Gunn stands out as Arden’s old boyfriend, Ailyn Pérez has a ball as an east European upstart...and Anthony Roth Costanzo is crisply effective as the company’s stage manager.

This is that rare beast: a contemporary opera that sets out to be funny and is actually highly amusing, with Terrence McNally’s witty libretto providing an ideal base for Heggie’s accomplished musical pastiches, ranging from a newly rediscovered bel canto opera to The Star- Spangled Banner. The cast has a ball: Joyce DiDonato as the down-to-earth diva (no type-casting there then); Nathan Gunn as her reappearing ex; Frederica von Stade as the company’s benefactor; and Ailyn Pérez as a soprano on the make.