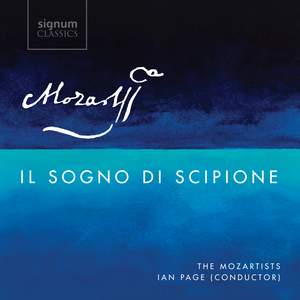 All the da capo arias offer moments of genuine Mozartian musico-dramatic spark – of which later there’s an abundance in the long accompanied recitative depicting Scipio’s awakening…This is a... — BBC Music Magazine, December 2017, 4 out of 5 stars More…

Composed in 1771 as a celebratory homage to Prince Archbishop Sigismund Schrattenbach of Salzburg, the Archbishop died before the piece could be performed. In the spring of 1772 Mozart amended the work so that it could be used in honour of Schrattenbach’s successor, Hieronymus Colloredo – the only necessary change was to alter the name of the dedicatee in the final recitative.

The story of Scipio’s Dream takes place in c.148 BC, while the celebrated Roman general is a guest in the palace of his ally Massinissa, King of Numidia (in modern day Tunisia). As Scipio falls into a deep sleep, he dreams that the allegorical figures of Fortuna (Fortune) and Costanza (Constancy) appear to him in Elysium and demand that he should choose one of them to follow for the rest of his days.

All the da capo arias offer moments of genuine Mozartian musico-dramatic spark – of which later there’s an abundance in the long accompanied recitative depicting Scipio’s awakening…This is a rewarding set: gracefully paced…and among its fresh-voiced young singers a standout leading tenor, Stuart Jackson, as Scipio.

The Orchestra of Classical Opera, playing on period instruments about a semitone below today’s pitch, are quite wonderful...The singers, most of them new to me, are just as fine. Stuart Jackson manages the melismas and wide leaps of his two arias with confidence and elegance...Ian Page presides over a charming performance, with well-paced recitatives and appropriate, sometimes extravagant decoration. This is minor Mozart, done supremely well.

The Classical Opera company gives a very fine performance and the recording is excellent. Collectors of this nicely designed and well produced series need not hesitate.

Not for the first time in this series I find myself returning in the final analysis to Page’s direction of his outstanding orchestra… beautifully nuanced and balanced playing.

The Orchestra of Classical Opera plays stylishly for Page, and with plenty of character and spirit… the characterful music-making on this recording offers substantial musical enjoyment.