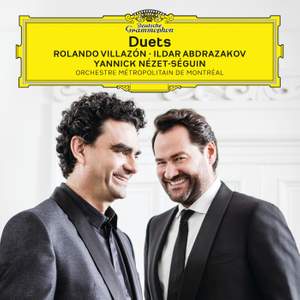 This is boys having fun. And the CD is at its best when the composer is having fun too…[Villazón] is in good voice, notably in the most fascinating number ion this recital, an extended scene... — BBC Music Magazine, May 2018, 3 out of 5 stars More…

"Vieni a me, ti benedico"

Three exceptional artists join forces for an operatic treat! Star tenor Rolando Villazón, who was just named artistic director of Salzburg Mozart week, Ildar Abdrazakov, one of the most sought-after young basses in the operatic world (Vanity Fair), who is debuting on Deutsche Grammophon with this album and the in-coming music director of the Metropolitan Opera Yannick Nézet-Séguin – a conductor full of vim and vigor – with Orchestre Métropolitain de Montréal.

Rolando and Ildar go back to 2009 when they first performed together in a production of "Lucia di Lammermoor" at the Met. They re-unite to sing a colorful variety of beautiful opera duets from nineteenth century drammi giocosi and opéras comiques, such as the beloved “Au fond du temple saint” from Les pêcheurs de perles (Bizet) or “Ah, quando fia… Se inclinassi a prender moglie” from L’italiana in Algeri (Rossini) as well as the duet “Je suis Escamillo” from Bizet’s famous opera Carmen.

Besides the renowned repertoire the artists also recorded two tracks with special arrangements referring to their personal life: the legendary Granada, standing for Rolando’s Latin heritage, Ochi Chernye as a tribute to Ildar’s home country Russia.

This is boys having fun. And the CD is at its best when the composer is having fun too…[Villazón] is in good voice, notably in the most fascinating number ion this recital, an extended scene from Boito’s Mefistofele. He’s properly world weary, a low hanging soul for Abdrazakov’s silky tempter to pull down.

Although [Villazón’s] voice seems to have less body than it did, he remains charming in Nemorino’s act 1 meeting with Dulcamara and spins a shapely line through Ernesto’s act 1 run-in with Don Pasquale…Much of the excitement [in the Carmen excerpt] comes from the scintillating playing Yannick Nézet-Séguin gets from the Orchestre Métropolitain de Montréal.

Villazón sounds in many respects in stronger voice than for quite some time - certainly in terms of the solidity and even brilliance of his tone in the iconic Pearl Fisher's duet, where Ildar Abdrazakov's firm, centered bass matches him nicely, even though that part is written for baritone. Not a classic pairing, then, but overall an enjoyable disc.