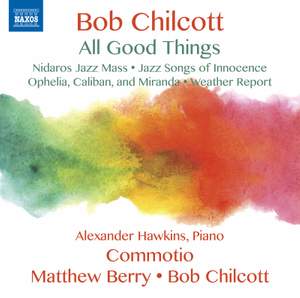 Is it jazz? Is it classical? Does it matter? Yes, maybe and no, are probably the answers…Of the shorter pieces the unaccompanied Weather Report provides the Commotio singers the opportunity to... — BBC Music Magazine, December 2017, 4 out of 5 stars More…

Chilcott: Marriage to my Lady Poverty

Chilcott: The Real of Heart

Jazz Songs of Innocence: I. Piping Down the Valleys Wild

Chilcott: Thou, My Love, Art Fair

Jazz Folk Songs for Choirs: No. 7, The House of the Rising Sun

Bob Chilcott is one of Britain’s most popular and respected composers and his choral music is performed worldwide. He has always embraced a broad stylistic palette and his writing for voice combined with jazz instrumentation gives these works a sense of vitality and energy. Performed by leading jazz soloists and Commotio, the distinguished promoters of contemporary repertoire, this sequence of brilliant villanelles, folk song arrangements and witty settings reveals once again the breadth of Chilcott’s musical imagination. Chilcott has enjoyed a lifelong association with choral music, as a composer, conductor, and singer. He was a chorister and choral scholar in the choir of King’s College, Cambridge and for twelve years was a member of the vocal group The King’s Singers. In 1997 he became a full time composer. A Little Jazz Mass, Requiem, and St. John Passion are among a number of works from his prolific output which are performed worldwide. He has written large-scale works, including The Angry Planet, community-based projects, pieces for children, and a significant amount of music for the church. In 2017 Chilcott was awarded an Honorary Fellowship of The Royal School of Church Music.

Is it jazz? Is it classical? Does it matter? Yes, maybe and no, are probably the answers…Of the shorter pieces the unaccompanied Weather Report provides the Commotio singers the opportunity to show their paces technically, and they turn in an appropriately dashing performance.

The rhythmic Gloria of the Nidaros Jazz Mass made me smile, and the Agnus Dei was touching. Commotio are no strangers to the composer’s music and give very persuasive performances.