A few years ago, a collection of seasonal works composed by Bob Chilcott and performed by Oxford chamber choir Commotio topped the classical Christmas charts - 'The Rose in the Middle of Winter' evidently striking a chord with listeners.

Now Commotio are back with another helping of Chilcott's immediately recognisable, accessible yet subtle style - 'All Good Things', a jazz-infused album that shows his immense flexibility as a composer (as well as the legacy of a long and successful career with The King's Singers).

During breaks in recording, I took a moment to put Bob on the spot about the imaginative and novel works that made up this album.

You’ve worked with Commotio before – their disc of your Christmas music was a great success. Did you tailor any of your writing to the choir’s particular qualities (and what do you think those qualities are)?

There are a number of things about Commotio that I have always found compelling. Firstly, their sound: it is clear and mobile and I never tire of listening to it. Their sound is also consistent, even though the singers change from time to time. The choir work in a very detailed way with their conductor Matthew Berry who encourages honest, good music making with a real focus on intonation. They are an enabled, intelligent group who clearly love what they do.

All the music on this disc was written for a number of different ensembles so they are not specifically tailored for Commotio. The choir has performed a couple of the a cappella pieces, “Marriage to my Lady Poverty” and “Weather Report” in the past, and as a primarily a cappella ensemble, singing with accompaniment is not their normal style. But they embraced the jazz repertoire with energy and enthusiasm and the pleasure for me was to see how everyone, both singers and players, approached the repertoire in a really reactive way, becoming a complete ensemble.

Tell us a bit about the Nidaros Jazz Mass – you’re not the first adapt jazz for liturgical use, but it’s still quite novel. Do you envisage this Mass coming into common use in British churches?

I wrote this piece originally for the excellent girls choir of the Nidaros Cathedral in Trondheim in Norway and then made the SATB version as on this disc a couple of years later for the Kyoto Echo Choir in Japan. The girls' choir asked me to write the piece because they enjoyed singing my earlier A Little Jazz Mass. Both these Masses were written originally as concert pieces, but I know that A Little Jazz Mass has been sung quite a lot liturgically as well as in concert and I hope this might be the same with regard to the Nidaros Jazz Mass.

'The Real of Heart' was commissioned in memory of the late John Scott, choirmaster at St Thomas, Fifth Avenue in New York. How did you approach writing a piece of this kind – were there any aspects of John as a person that you wanted to put into the music?

John was a contemporary of mine at university and a hugely gifted and energetic man. When he died I felt I wanted to honour him in some way. Around the same time I was asked to write a piece to raise money for Chorus America, a fine organisation based in Washington DC that works to support choirs in the United States. I thought that this was an opportunity to find a text for a piece that would resonate with all of us who reflect on how those close to us affect our lives both now and in the past, and this text felt appropriate to me.

The names of Ophelia, Caliban and Miranda will probably be familiar to many people, but the miniature cantata featuring them strays more than a little from what happens in Shakespeare’s scripts! Can you tell us a bit about where this piece came from?

In 2016 I was asked to write a Shakespeare–themed piece for Picfest, a youth choir festival in Eugene, Oregon, that I have been associated with for a number of years. The brief was to write a piece for a 350-voice mixed youth choir along with the iconic jazz fusion group The Yellowjackets, who are based in Los Angeles. I asked my friend the poet Charles Bennett to imagine a group of songs that gave voice to three characters of his choosing from Shakespeare plays. He came up with three brilliant villanelles that came from the perspective of “What if…” songs. So the first one is sung by Ophelia who tells Hamlet that she could have helped to make him a great King, had he saved her from drowning in the stream. In the second, Caliban reflects on how Ariel teaches him to play the saxophone, to help him get over his love for Miranda. And in the third, Miranda tells Ferdinand that she thinks he’s a fine person, but actually she needs to go back to the island to reflect on the fact that she is really not in love with him, but with Caliban.

The jazz folksongs, of which two feature on this album, each adopt a different idiom to throw fresh light on the original. How did you decide on a style for each song?

A number of years ago I wrote a book of jazz folksong arrangements on a whim – I think I’d had the idea for one and this made all the others happen. These are two of my favourites – “Scarborough Fair” in five/four time was an attempt to emulate the great jazz arrangements that Richard Rodney Bennett did for the King’s Singers in the 1970’s. I tried to get a sixties feel in this arrangement, and the scat section in the middle recalls to me a segment of music from the brilliant score of “The Sting” written by Marvin Hamlisch which I have always loved. In “The House of the Rising Sun” I tried to find a groove that would help the song be sung by any type of choir, without feeling stylistically compromised. Of course this approach is very subjective, but I think in this recording Commotio make this song sound true and straightforward. 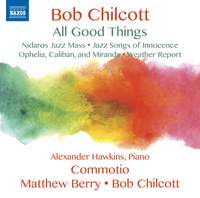 All Good Things was released on Naxos on 8th September.

Other forthcoming and recent recordings of works by Bob Chilcott 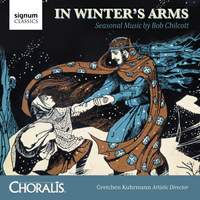 Larger-scale Christmas works dominate this album from US choir Choralis - in particular a cantata about the Czech king Wenceslas's winter charity towards a poor peasant. 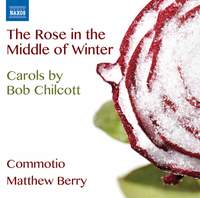 Bob Chilcott: The Rose in the Middle of Winter 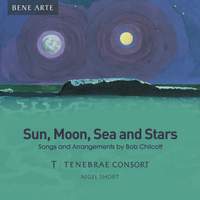 World-leading chamber choir Tenebrae perform a selection of Chilcott's arrangements of popular folksongs and favourites from around the world.