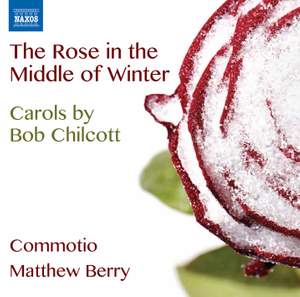 Bob Chilcott: The Rose in the Middle of Winter

Chilcott: Song of the Crib

Chilcott: The Rose in the Middle of Winter

This is the truth (I)

Sweet was the song

Rejoice and be merry

This is the truth (II)

Chilcott: The night he was born

Chilcott: Gifts for the Child of Winter

Bob Chilcott has been described by The Observer as ‘a contemporary hero of British Choral Music’, and his music is commissioned and sung by choirs throughout the world. His Christmas pieces, a number of which are heard here in première recordings, reveal his enthusiasm for recently written texts, to which he responds with acute verbal sensitivity.

Commotio is one of the UK’s foremost chamber choirs, hailing from Oxford, where they have performed choral music of the 20th and 21st centuries since 1999.

The central piece of this album is the previously unrecorded carol sequence On Christmas Night, which shows how his ambition is to infuse new blood alongside more traditional melodies and for each to be enriched by it.

Bob Chilcott is one of Britain’s most popular and most-performed composers of choral music, and has enriched the contemporary repertoire immensely.

Chilcott share Rutter's facility with melody...An ex-chorister himself, he also sets words very naturally....Chilcott's music is often more demanding than Rutter's, but that's no problem for the excellent singers of Commotio, expertly conducted by Matthew Berry.

The music on this disc, which is unfailingly attractive, certainly communicates with the listener directly and strongly. That communication with the listener is undoubtedly enhanced by the performances of Commotio...I think this delightful disc will enhance the musical side of Christmas for a lot of people.

an ideal showcase for Commotio’s clean, unfussy sound and pristine intonation...it all feels unmistakeably ‘Christmassy’ from the first phrase: Chilcott has a happy knack for a memorable melody, and his settings of often familiar texts feel so natural that they’ll feel like old favourites after just one hearing.

A welcome present of fresh, tuneful carols here from Bob Chilcott, a master steeped in the genre...Sure to be a hit with singers everywhere will be his Song of the Crib, an instantly likable, warm and sweet setting of words by Charles Bennett