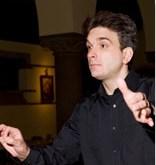 Matthew Berry, the conductor and joint-founder of Commotio, studied music at University College, Oxford, where he was organ scholar and then assistant organist. He studied organ under David Sanger, David Goode, and Ian Curror. After conducting the Oxford Chamber Choir for two years as a student, he founded Commotio in 1999. On completion of his degree, he studied post-graduate choral direction with Patrick Russill for two years at the Royal Academy of Music in London. His expertise lies in the research and promotion of little-known contemporary choral repertoire, principally from the United Kingdom, Scandinavia, South Africa, the United States, and Slovenia. In fourteen years working with Commotio he has initiated many British and world premières. In February 2013 the governing body of the Royal Academy of Music elected Matthew Berry an associate of the Royal Academy of Music (ARAM), an award to former students who have made a significant contribution to the music profession.