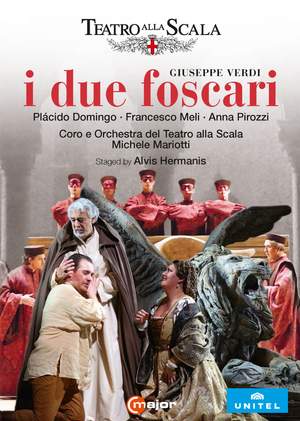 Offer, Verdi: I Due Foscari

Even if he still sounds like a tenor singing in his lower range rather than a true baritone, Doming’s Artistic commitment remains exceptional, and vocally this is a remarkable achievement at... — BBC Music Magazine, January 2018, 3 out of 5 stars More…

In his ‘new life’ as a baritone Plácido Domingo has triumphed in the role of Francesco Foscari in Los Angeles, London and Vienna. Now he takes to the role in La Scala, Milan, the theatre that is the symbol of Italian opera. I due Foscari, premiered in 1844, famously one of Verdi’s darkest operas, is staged by Alvis Hermanis, who made such an impact at the Salzburg Festival with Die Soldaten and Il trovatore. Domingo is joined by two of Italy’s most exciting singers, the soprano Anna Pirozzi and the tenor Francesco Meli, and the acclaimed Italian conductor Michele Mariotti. The Financial Times was deeply moved by Domingo’s performance, calling his interpretation of the role ‘sublime’.

Even if he still sounds like a tenor singing in his lower range rather than a true baritone, Doming’s Artistic commitment remains exceptional, and vocally this is a remarkable achievement at 75. The other main participants are also honourable…Mariotti’s dynamism certainly keeps the score effectively on the move.

The role, as well as being age-appropriate, seems to sit very well for Domingo’s voice…Pirozzi is a terrific Lucrezia. The voice is bright and fearless…Mariotti’s conducting – an expertly judged mixture of grandeur and fire – strikes me as no less impressive than Antonio Pappano’s.

Overall the conducting of Michele Mariotti serves Verdi’s melodic and dramatic music a full and idiomatic measure to leave an overall feeling of satisfaction.

In a cast of first-rate singers, the star is obviously Plácido Domingo as the Doge, displaying his indisputable stage presence and acting skills, along with a voice that meets the composer's requirements. Francesco Meli excels as his unfortunate son Jacopo: his is a beautifully lyrical, mellow tenor, confident and comfortable in the persistently required higher register. Carefully designed period costumes and well-regulated lighting produce beautiful results, as do the elegantly simple sets -mostly mobile panels allowing fluid scene changes.