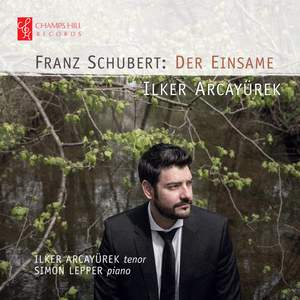 Arcayürek is a young Turk, light of voice, but not in the English tenor mode…On the one hand, I am relieved to hear a singer who doesn’t go in for elaborate interpretation…On the other, I found,... — BBC Music Magazine, January 2018, 3 out of 5 stars More…

The up-and-coming tenor talks to Katherine about his career to date and Der Einsame, out this month on Champs Hills Records.

Voted into the top ten of a new generation of rising stars and hailed for his golden voice by Opera Now Magazine, Ilker Arcayürek is the winner of the 2016 International Art Song Competition of Stuttgarts Hugo Wolf Academy. He was finalist of the BBC Cardiff Singer of the World Competition 2015 and has been selected a BBC Radio 3 New Generation Artists through 2017. He made his highly anticipated Wigmore Hall recital debut featuring lieder by Schubert and Schumann in autumn 2016. Loneliness is the theme that links all the songs on this album.

Arcayürek is a young Turk, light of voice, but not in the English tenor mode…On the one hand, I am relieved to hear a singer who doesn’t go in for elaborate interpretation…On the other, I found, listening to the recital straight through, that there is too little variation of tone…the sensationally good accompaniment of pianist Simon Lepper does all the interpreting necessary – he is certainly a revelation.

[An] intelligently conceived recital, executed with vocal freshness and an open-hearted quality that recalls the young Nicolai Gedda and Christoph Prégardien...Arcayürek sings ‘Schwanengesang’, for example, with the kind of fearless clarity that comes with minimum vibrato, projecting emotional content with understated inference rather than colouring of individual words.

It’s been a while since we’ve had a debut disc as engaging as this...Arcayürek has the kind of airy, easily ringing tenor that puts across words beautifully, with power in reserve yet a hint of vulnerability too...With Lepper offering consistently vivid support, Arcayurek spins long lines that are achingly sweet.

There is immense potential from this tenor, who has clearly worked hard to get inside these songs, yet doesn’t overburden the poetry with too many artful effects. Schubert, who saw his songs performed casually in living rooms among friends, would love this wonderfully intimate recording.