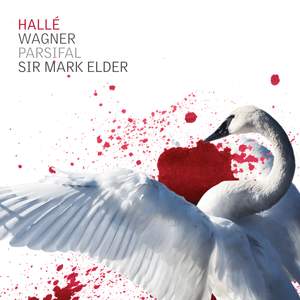 “Working with his orchestra, the Hallé, Sir Mark Elder produced an account of this miraculous score which, for a combination of passion and precision, surpassed any other that I have ever heard.”

Wagner’s last opera, Parsifal, which the composer declared to be his “farewell to the world” has been described as being in many ways the most “total” of all his “total art works”. His spiritual swansong unfurls as a slow-moving, ritualistic drama, and is arguably the best-suited of all his operas to the style of concert staging offered here.

Audio re-mastered by Hallé’s award winning engineer Steve Portnoi: the original multitrack recordings of both rehearsals and concert were edited to eliminate audience noise whilst retaining the sense of place and the staged nature of the performance. The edited multitrack was then remixed to achieve a sound in keeping with Hallé label releases.

The Hallé offers playing worthy of the orchestra’s long Wagner tradition. Elder’s very slow Prologue reminds us of his journeyman days under Reginald Goodall, leading into a luminous, measured performance with many beauties, notably the Grail scene, yet dramatic enough to animate Klingsor’s nervy strings

Its best feature, by some distance is a quite superb performance by the Halle itself. Already admired as a Wagner conductor, Elder seems exquisitly comfortable in leading an account marked by capacious, long-breathed tempos, seemingly tuned to a pulse ordained in some unearthly realm. Best of the soloists is Katarina Dalayman.

[Dalayman's] portrayal conjures dramatic presence out of every phrase and can compare with the best of those already available on disc...Elder’s approach to the score is distinctly measured...but the sustained beauty of the Hallé’s playing and the perfect blending of the textures just about keeps it going.

a testament to Elder’s ability to draw the very best from an orchestra, and to traverse the huge peaks (and troughs) of Wagner’s scores with unerring skill...Yes his tempos are mostly slow, but the Hallé plays Wagner’s last opera with shimmering beauty...Dalayman’s Kundry is a class act, sensual and sensitively sung.