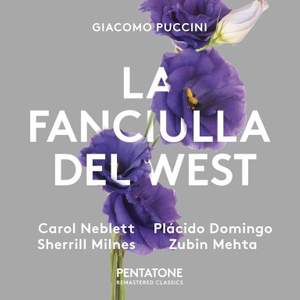 This classic recording dating from 1977 is Gramophone magazine’s top choice for the opera and can now be enjoyed for the first time in full SACD hybrid multichannel sound.

“Carol Neblett is a strong Minnie, vocally distinctive and well characterised, while Plácido Domingo and Sherrill Milnes make a good pair of suitors …. Zubin Mehta conducts with real sympathy for the idiom” (Gramophone). And the Penguin Guide to Compact Discs and DVDs (2003/4) enthused “Domingo sings heroically … but the crowning glory of a masterly set is the singing of Carol Neblett … Full atmospheric recording to match.”

Although recorded in multi-channel sound, these memorable performances have previously been available only in the conventional two-channel stereo format. Using state of the art technology which avoids the need for re-mixing, our engineers have remastered the original studio tapes to bring the performances to life as originally intended: in compelling and pristine multi-channel sound.