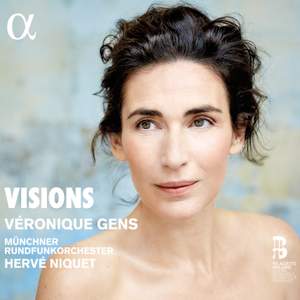 Gens is in fine voice – indeed, she seems to be in her prime. Her diction is as always immaculate and she produces a stream of elegant tone…and the required vocal heft to ride Massenet’s orchestra... — BBC Music Magazine, December 2017, 4 out of 5 stars More…

Katherine enjoys Véronique Gens's fascinating recital of French Romantic arias, all with a common theme of dreams and visions.

After an album of French songs (Néère, Alpha215) that earned her a Gramophone Award in 2016, Véronique Gens presents her new recital, this time with orchestra, which gives her an opportunity to display the maturity of her ‘Falcon’ soprano, the central tessitura typical of French Romantic opera, which takes its name from Cornélie Falcon, who created the works of Meyerbeer and Halévy staged in the 1830s.

She pays tribute here to a number of composers whose unknown operas she was the first to reveal in projects mounted by the Palazzetto Bru Zane (which also coproduced the present recording), including David, Godard, Saint-Saëns and Halévy. The programme selects arias from all the genres in vogue in the Romantic era: opera (Saint-Saëns, Halévy, Godard, Février), opéra-comique (David), oratorio (Franck, Massenet) and the cantata for the Prix de Rome (Bizet, Bruneau).

Gens is in fine voice – indeed, she seems to be in her prime. Her diction is as always immaculate and she produces a stream of elegant tone…and the required vocal heft to ride Massenet’s orchestra in the number from La Vierge. But it’s at her prayers that she excels; in Février’s Gismonda or Bruneau’s Geneviève.

It’s provocative stuff, its emotional – at times emotive – impact immeasurably heightened by very careful programming...Gens and Niquet throw themselves into all this with an engrossing mix of abandon and restraint. Gens’s trademark combination of purity of utterance and smoky tone speaks volumes.

Not a number proves less than worth hearing. [Gens] her tonal steadiness, exact intonation and care over finish of phrase and cleanliness of line are virtues of musicianship already widely demonstrated.

Immensely attractive music - I can think of no finer advocates than Gens and the Münchner Runfunkorchester under Hervé Niquet, who sound for all the world as if they’re playing period instruments thanks to the idiomatic handling of style and sonority on show. There’s a very particular something about Gens’s basic timbre which I’ve always found immensely engaging...and which is eminently suited to the task of bringing these febrile heroines to life.

Gens has a cool, clear lyric soprano that sounds barely touched by the years, and brings idiomatic diction, tonal radiance and a wide spectrum of colour ...Gens is at her peak, her singing gorgeous.

What they all have in common is a nobility of utterance, united here by the stunning soprano of Véronique Gens, more often heard in earlier repertoire but bringing piercing clarity to these arias.

With plenty of passion and a perfect feeling for the drama in a program of rarely performed French opera and oratorio arias, soprano Véronique Gens and conductor Hervé Niquet present a most attractive CD comprising many unfairly forgotten musical gems.