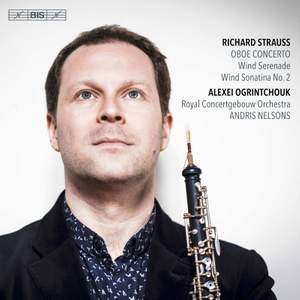 What a subtle and fascinating artist is oboist Alexei Ogrintchouk – a team player as well as a born soloist, whose ideas on the Strauss Wind Serenade and Second Sonatina are as distinctive in... — BBC Music Magazine, November 2017, 4 out of 5 stars More…

Recording of the Week,  Songs by Richard Strauss, plus the Oboe Concerto and works for wind ensemble

James listens to a wealth of vocal and instrumental works by Richard Strauss - with Nicky Spence, Rebecca Evans, Alexi Ogrintchouk and others.

Despite his advanced age and the chaos surrounding him, Richard Strauss remained highly productive well into the 1940s. As the Second World War was coming to an end in 1944-45, the eighty-year-old composer was working on his Oboe Concerto and Sonatina No. 2 for winds, as well as the Metamorphosen for strings. While the latter work was an explicit response to the destruction Strauss was witnessing, in the Concerto and the Sonatina the composer seemed to be turning his mind away from the events surrounding him. There is a pastoral quality to the oboe concerto, with a highly tuneful solo part and more than occasional touches of nostalgia for the 18th century. Similarly, Strauss headed the score of the sonatina with a dedication ‘to the spirit of the immortal Mozart at the end of a life full of thankfulness’.

To an extent, one might say that Strauss at the end of his life returned to the musical models of his youth. It is therefore fitting that these two works frame the Serenade in E flat major for wind ensemble, composed more than sixty years earlier in the tradition of entertainment music by Schubert and Mendelssohn. Alexei Ogrintchouk, one of today’s leading oboists, has proven himself in previous recordings for BIS ranging from Bach to Nikos Skalkottas and Antal Doráti. With sterling support from the Royal Concertgebouw Orchestra conducted by Andris Nelsons, he here makes light of the considerable difficulties of the solo part of the oboe concerto, and also directs his colleagues from the orchestra’s wind section in the works for wind ensemble.

What a subtle and fascinating artist is oboist Alexei Ogrintchouk – a team player as well as a born soloist, whose ideas on the Strauss Wind Serenade and Second Sonatina are as distinctive in their supple tempo-changes as Andris Nelson’s contrasts-writ-large (but never too large) in the Oboe Concerto.

As Ogrintchouk pours out the blossoming lines of Strauss’s opening paragraph, the first impressions are encouraging: a rich but focused tone, a melodic give-and-take that feels simultaneously playful and expressive, and Nelsons and the orchestra closely in accord. This is, make no mistake, a fine performance, with orchestral playing that’s strikingly crisp and alert but spacious too.

It's an enchanting recording of [the Oboe Concerto]. Ogrintchouk's tone is sweet and yet robust where required, and the Concertgebouw play wonderfully for him. There's a freedom and a flexibility of pulse that is most impressive...Both [chamber works], directed by Ogrintchouk, are full of some extraordinarily refined wind playing. Indeed the whole disc oozes charm, grace and style; an utter delight.

Nelsons conducts a chamber- sized Concertgebouw with equal sensitivity and elegance, and the orchestra is on top form throughout. Ogrintchouk directs from the oboe in the two wind serenades, the First youthful but precocious, the Second, Fröhliche Werkstatt, more substantial and contemporaneous with the concerto.