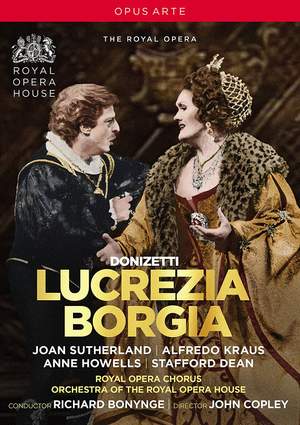 Donizetti's operatic portrayal of Lucrezia Borgia is one of the most demanding roles for a soprano, and only such accomplished stars as Joan Sutherland have risen to the challenge. Lucrezia was notorious in Renaissance Ferrara as much for her beauty as for the political intrigue and suspicious deaths that surrounded her and her family. Here Sutherland deftly captures the complexity of a powerful, vengeful woman, who is at the same time a loving mother - in the final scenes she chillingly shows her unsuspecting victims the coffins in which they will be buried, but cannot bear the heartbreaking revelations that follow. Richard Bonynge conducts a cast including Alfredo Kraus as Gennaro, supported by the Orchestra of the Royal Opera House and Royal Opera Chorus, in John Copley's production for The Royal Opera. This recording, with English subtitles, is preserved in its original Standard Definition and 4:3 picture format.

Fleet, if not polished...Sutherland tackles the title role with her usual attributes of a voice of considerable size, extention and pinpoint agility, no acting skills but a grand presence...Copley's lavish production is traditional to a T, with the extra fascination of watching 16th-century Italy through the lens of 1980s 'Dallasty' fashion - sleeves have never been bigger.