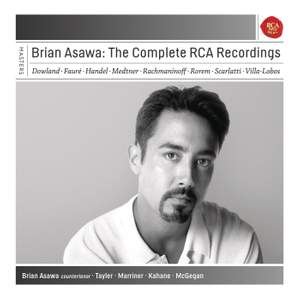 Dowland: It was a Time when silly bees could speak

Dowland: A shepherd in a shade his plaining made

Campion: Come let us sound with melody the praises

Campion: Oft have I sigh’d for him that hears me not

Campion: Turn Back You Wanton Flyer

trad.: There were three ravens

trad.: The dark is my delight

trad.: Where the bee sucks

Villa-Lobos: Floresta do Amazonas: Canção do Amor (Song of Love)

Rachmaninov: She is as beautiful as midday, Op.14 No. 9

Rorem: More than a day

II. My Brain is Littered

The Tune - Calm and Sad

Rorem: From an unknown past

The Lover in Winter, Plaineth for the Spring

My Blood So Red

The trouble with trebles in trousers...

The American Brian Asawa, who died tragically young in 2016, became one of the world’s foremost countertenors before he was 30, acclaimed for the exceptional size, richness, agility and beauty of his voice. In 1991 he was the first countertenor ever to win the Metropolitan Opera Auditions and soon he was singing with opera companies all over the world. He was also a gifted recitalist and made a notable series of recordings for RCA/BMG. All reissued here in a 5-CD set, they range from Elizabethan Lute Songs to a disc of songs by Ned Rorem and include excerpts from the complete recording of Handel’s opera Serse conducted by Nicholas McGegan, in which BBC Magazine singled out for praise Brian Asawa’s “luscious legato” in the role of Arsamene.