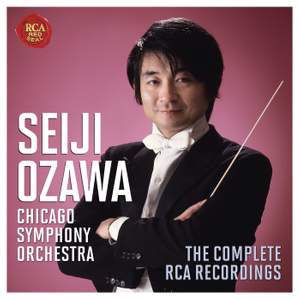 Harbingers of Spring (Dances of the Young Girls and Boys)

Games of the Rival Tribes

Procession of the Wise Elder

Adoration of the Earth (Wise Elder)

Mystic Circles of the Young Girls

Summoning of the Ancients

Ritual of the Ancients

He is “one of those rarities, a natural conductor”, exclaimed one reviewer after Seiji Ozawa’s Chicago Symphony debut on July 16, 1963 at the orchestra’s Ravinia Festival. “His technical facility is phenomenal, his sense of rhythm both solid and subtle, and his knowledge of scores… detailed and intimate.” Another Chicago critic concurred: “His conducting technique reminds you of his teacher, Herbert von Karajan, in that it lays the score in the lap of the orchestra with transparency of gesture and human communication, then commands acceptance.” At the end of the season, the 27-year-old podium sensation was appointed the festival’s first-ever music director, and in the years that followed Ozawa also became a regular CSO guest at Orchestra Hall, its downtown home.

Between 1965 and 1968, he and the orchestra made a series of remarkable albums for RCA. Collected here for the first time in a single box of 6 CDs, they represent an early high-point – perhaps unsurpassed – in the Japanese maestro’s long and distinguished recording career. Featured among these dynamic Ozawa/Chicago performances are three cornerstones of the symphonic repertoire: the Beethoven and Tchaikovsky Fifth Symphonies and the Schubert “Unfinished”, all remastered from the original analogue tapes for this edition.

“The Chicago Symphony is one of the greatest orchestras I have ever conducted, and I have had no greater glory in music than I have experienced here.” With those words, Seiji Ozawa singled out the significance of his Ravinia tenure and ensuing collaboration with the CSO.