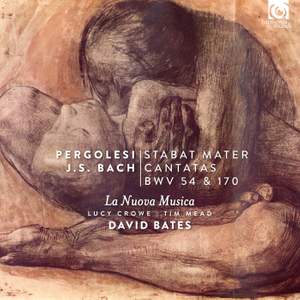 [Mead] offers articulate readings of the cantatas, his voice (with its faint echoes of the young Andreas Scholl) is beautifully controlled, its reedy, instrumental quality yielding lovely dialogues... — BBC Music Magazine, August 2017, 3 out of 5 stars More…

Two of Bach’s finest cantatas, both for solo alto, composed in Weimar (1714) and Leipzig (1726) respectively, are here coupled with the delicious agony of grief that is Pergolesi’s 'Stabat mater', an acknowledged masterpiece by one of the 18th century’s most influential composers. Bach so admired the composition of his Neapolitan colleague that he made his own ‘parody’ of it to a German text. On this recording, La Nuova Musica, in its 10th anniversary year, and its two eminent soloists display equal mastery of both idioms.

Counter-tenor Tim Mead is praised for his “alluring...consistently excellent” interpretations (The New York Times). With his “rich, mellifluous sound” (Guardian), he is recognised as one of the finest across the generations of counter-tenors. Described as having a voice of bell-like clarity with an impeccable vocal technique and powerful stage presence, Lucy Crowe has established herself as one of the leading lyric sopranos of her generation.

[Mead] offers articulate readings of the cantatas, his voice (with its faint echoes of the young Andreas Scholl) is beautifully controlled, its reedy, instrumental quality yielding lovely dialogues with the ensemble…[Crowe’s] warm and agile soprano suits the mellifluous Italian idiom. [Bates] has lined up a crack team of instrumentalists, with eloquent solo contributions by oboist Patrick Beaugiraud and organist Silas Wollston.

In Lucy Crowe and Tim Mead the ensemble have both period specialists and singers with enough muscle and tone to temper stylistic precision with human drama. Together they lead a performance that is both meditation...and a vivid sacred drama...Bates and his ensemble take an active part in the drama too... A performance as sophisticated emotionally as it is musically.

Lucy Crowe and Tim Mead withstand comparison with the finest on disc. Their voices blend ideally in the duets, and their stylish phrasing in the arias is especially rewarding here...A superb disc of baroque vocal music.

[La Nuova Musica] let phrases sigh and breathe and supply a decent amount of bass under properly expressive melodic lines...Crowe and Mead are both in sumptuous voice, and both fiery in the most dramatic moments of the Stabat Mater.