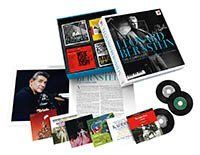 Bernstein: I Hate Music, a cycle of five 'kid songs'

Bernstein: On the Town

With his centenary already looming large, Sony Classical releases the most comprehensive recorded collection ever released of the music of American conductor, composer and educator Leonard Bernstein (1918–1990). “Few composers capture their time and become the iconic voice of their age,” wrote his close associate, conductor John Mauceri, in a tribute to his late mentor, one of a handful of figures in the 20th century who truly changed the face of music. - Special edition boxset dedicated to the works of LEONARD BERNSTEIN; conductor, composer and educator in preparation of Bernstein’s 100th anniversary in August 2018.