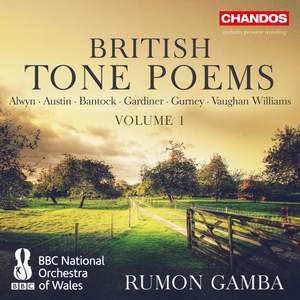 A highly enjoyable wander away from the familiar British path, including some rare youthful Vaughan Williams. The playing is suitably characterful throughout. — BBC Music Magazine, May 2017, 4 out of 5 stars More…

Alwyn: Blackdown, A Tone Poem from the Surrey Hills

Bantock: The Witch of Atlas, Tone Poem No. 5 for Orchestra

Alongside their British Isles Overtures series, the BBC NOW and the conductor Rumon Gamba launch a project to bring often neglected symphonic poems by British composers to wider attention and fame. This first volume presents some of the most individual, yet rarely heard, British tone poems written in the early twentieth century, by composers ranging from the long-established Ralph Vaughan Williams and William Alwyn to Balfour Gardiner and Granville Bantock, giants in their time. Works include Bantock’s atmospheric The Witch of Atlas, based on a poem by Shelley, Frederic Austin’s symphonic rhapsody Spring, Gardiner’s evocation of summer A Berkshire Idyll, recorded here for the first time, and Gurney’s mysterious A Gloucestershire Rhapsody, never performed before 2010.

A highly enjoyable wander away from the familiar British path, including some rare youthful Vaughan Williams. The playing is suitably characterful throughout.

No tub-thumping here from the BBC National Orchestra of Wales and conductor Rumon Gamba – rather, a reminder that imperial Britain relied on mainland Europe, including Russia, for its musical influences...For all the spot-the-influence games to be played here, there’s still a lot to charm even the most resistant listener.

this is a most notable release…

Each of these short works is a treasure, rarely recorded…The Chandos engineers have displayed their usual expertise in creating a rich, natural sound. I look forward to future issues in this enterprising series.