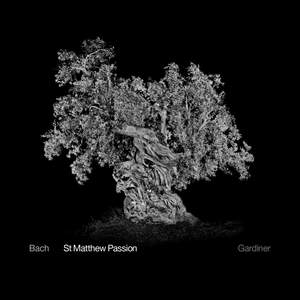 James Gilchrist is among the most communicative of storytellers and his lightly articulated, subtly nuanced declamation and, where required, sense of urgency are eloquent and dependable…the many... — BBC Music Magazine, July 2017, 3 out of 5 stars More…

Katherine listens to the venerable Bach expert's new account of the inimitable St Matthew Passion, with the English Baroque Soloists and the Monteverdi Choir.

Katherine talks to the conductor about his second recording of Bach's masterpiece, due out on Soli Deo Gloria tomorrow.

A new live recording of Bach’s St Matthew Passion (Matthäuspassion BWV 244), recorded in Pisa Cathedral during the Anima Mundi Festival as part of the Monteverdi Choir and Orchestra’s 2016 tour.

As well as the full sung texts, the booklet includes both a programme note by Sir John Eliot Gardiner as well as his tour notes: written both before and during their 6-month international tour – which began in Valencia in March and concluded with this performance in Pisa on 22 September – these include diary entries and notes given during rehearsals or sent in the aftermath of concerts to the performers (who were performing from memory).

All notes and texts are included in English, German and French translations.

James Gilchrist is among the most communicative of storytellers and his lightly articulated, subtly nuanced declamation and, where required, sense of urgency are eloquent and dependable…the many choruses, chorales and arias come across convincingly…Eleanor Minney deserves special mention for her ‘Erbarme dich’…Gardiner directs all with insight, sensibility and a commendably athletic overview which ensures an unflagging sense of drama

The combination of James Gilchrist and Neil Davies as Evangelist and Jesus…is ideal.

an intensely human Bach, sensitive and alert, heart open to every slightest turn of emotion in the Passion story...Gardiner has recorded the St Matthew Passion before, but this new recording is exceptional in its clarity and detail, the summation of his life’s experience of the music.

If a Passion performance has no sense of community it has nothing, and this is surely the making of Gardiner’s account...a thoughtfully moulded, expertly executed and deeply committed reading, so honestly communicative of its intent and so free of self-conscious monumentalism, sententiousness or melodramatics...I believe it to be one of his finest achievements.

Gardiner may have lived with this music for half his life, but still gives the impression that he’s discovering little miracles in it for the first time: there’s never any sense of routine from him or from the performers, despite this being the final performance of a gruelling European tour...One for Gardiner devotees and newcomers alike, then: if you own his earlier recording, you’ll want to hear this for the crackling dramatic energy generated by the live performance.

Gilchrist is an incisive Evangelist, gripping in the passages of drama, and Stephan Loges a noble-toned, idiomatic Christus. Gardiner’s Bach remains a lodestar, provided you are not wedded to one-voice-to-a-part minimalism.

this glorious St Matthew Passion from John Eliot Gardiner and the Monteverdi Choir is musically as near-perfect as anyone could wish...All the Gardiner hallmarks are here: brisk tempi, crisp chorus work and a complete devotion to the text. Gilchrist and Loges excel.

A revelatory psychological document...You will rarely find Matthew’s description...more melodramatically conveyed in music...[Gilchrist is] a storyteller who seems in the midst of the events he is describing, like a war correspondent. You may also feel - if you are a fan of period-instrument textures at their most sinuous and whittled down- that Bach’s score has never been better served than by the English Baroque Soloists.