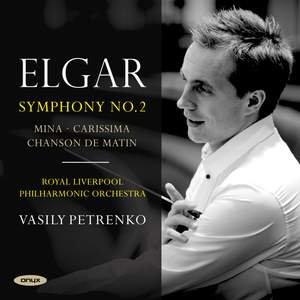 [Petrenko’s love for Elgar] can be felt throughout this performance too: in the sumptuous but textured orchestral sound (beautifully recorded), in the attentive phrasing and in the power of the... — BBC Music Magazine, June 2017, 3 out of 5 stars More…

"What’s the matter with them Billy? They sit there like a lot of stuffed pigs!" Elgar commented to his friend W.H Reid, the leader of the Queen’s Hall Orchestra after the chilly reception given to the 2nd Symphony at its premiere in 1911. More emotionally complex and ambiguous than the first symphony, the 2nd seems to hint at the apocalyptic events that would be unleashed just three years on. "Be like a woman dropping a flower on a man’s grave" wrote the composer of the ‘Spirit of Delight' theme in the coda of the second movement.

This eagerly awaited Elgar 2 from Petrenko and the RLPO will further delight those fans who bought their recording of the 1st Symphony, released on Onyx to critical acclaim last year.

[Petrenko’s love for Elgar] can be felt throughout this performance too: in the sumptuous but textured orchestral sound (beautifully recorded), in the attentive phrasing and in the power of the climaxes

The RLPO, on great form, provide a sumptuous array of textures with an ensemble that is crisp and incisive. It is so good to hear every note of the athletic brass counterpoint in the horns and trumpets and the lithe filigree of Elgar’s careful doublings between wind and strings

Petrenko’s tempos in the long opening movement are admirably flexible, but it’s in the last two that interpretation and playing seem to me finest; the finale achieves a noble grandeur and melancholy.

Petrenko displayed a perceptive understanding for Elgar in his disc with the RLPO of Symphony No 1. Here again, flexibility of tempi, contrasts between lyricism and angst, are brought out with expansive yet controlled playing: the horns and, in the melancholy Larghetto, the woodwind especially. Strings are firm and refined throughout.