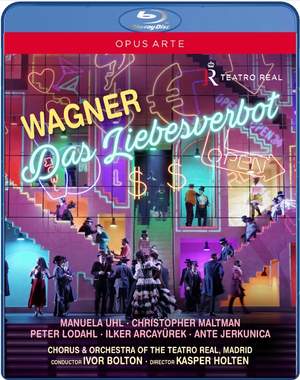 It's well…performed here, especially by the splendidly full-voiced chorus. — BBC Music Magazine, May 2017, 3 out of 5 stars More…

It's well…performed here, especially by the splendidly full-voiced chorus.

Filmed for DVD, Kasper Holten’s colourful production lifts the spirits and a hard-working cast is swept along

Musically, the cast is led by the ever-dependable Christopher Maltman, who gives a touch of magic to the rather archetypal figure of the wicked duke...The smaller soprano roles are well taken too, with María Miró proving a good foil to the heroically chaste Isabella. The finest heroes, however, are the orchestra, who play the score as though it were Meistersinger, sounding like gods right from the sparkling overture to the jolly resolution

As a Das Liebsverbot virgin, I was keen to apply the old test: if this opera was by J. Soap rather than R. Wagner, how would we rate it? My personal verdict is ‘highly’. Young Richard concocted a cracking libretto…his score has verve, variety and several alluring examples of the soaring, extended melodies that mark out his special territory.