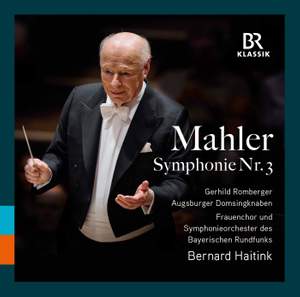 a perfect beauty of a performance, natural sound matching natural evoution and every solo perfectly intoned — BBC Music Magazine, May 2017, 5 out of 5 stars More…

Gustav Mahler's Third Symphony still ranks today as one of the greatest and most powerful creations of the Late Romantic period. The huge symphony, longer and more monumental than the others and containing texts from the collection of poems by Clemens Brentano and Achim von Arnim entitled “Des Knaben Wunderhorn”, was composed over a period of four years from 1892 to 1896, and especially during the summers of 1895 and 1896, which Mahler spent at the Attersee in Austria. Following performances of several individual movements of the symphony, the complete work was premiered on June 9, 1902, at the 38th “Tonkünstler Festival” in Krefeld. Mahler conducted the Städtische Kapelle Krefeld and Cologne’s Gürzenich Orchestra at this exciting event. It was one of his greatest successes, and his contemporaries were deeply impressed. Between 1902 and 1907, the composer conducted his Third Symphony a further 15 times.

Of the six powerful movements, the slow fourth one requires not only a large orchestra but also a mezzo-soprano solo for a setting of the “Midnight Song” (“O Man! Take heed!”) from Friedrich Nietzsche's poetical-philosophical "Thus Spoke Zarathustra," while in the cheerful fifth movement the mezzo-soprano soloist is joined by a children’s choir and a female chorus for the song Es sungen drei Engel from "Des Knaben Wunderhorn". The symphony is a huge challenge for all its performers, and this concert recording of June 2016 has a prestigious line-up: guest conductor Bernard Haitink with the Symphonieorchester des Bayerischen Rundfunks, the Augsburger Domsingknaben and the Frauenchor des Bayerischen Rundfunks; the solo parts are sung by Gerhild Romberger.

a perfect beauty of a performance, natural sound matching natural evoution and every solo perfectly intoned

While the performance feels most engaged when the music is in repose, the inner movements are more than adequately eloquent. The excellent posthorn solos in the third are credited to Martin Angerer…Gerhild Romberger has an old-fashioned contralto-ish timbre in the Nietzsche setting…the choirs sound lovely in the fifth movement and the finale has always been a Haitink speciality, plainly spoke and all the more moving for it.

Haitink seems just a pure conduit for the music.

Haitink has long been regarded as one of our least egocentric and interventionist conductors, and I don’t think I’ve ever felt that more keenly than on this recording...throughout the long first movement in particular, there’s a sense that the music is simply being allowed to unfold itself organically rather than being driven too hard.

The opening horn unison arrests and promises much, Mahler’s Third delivered with the long view typical of Bernard Haitink. He doesn’t sensationalise the music…the remaining five movements, naturalistic and divine, receive superior outings – poetic, eloquent, picturesque, as agile and athletic as required. The posthorn solo during the third movement is especially magical…as ever from Bavarian Radio, the orchestra and the sound are exemplary.