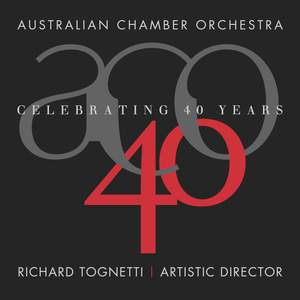 The Australian Chamber Orchestra is a national treasure, and a world-beating musical force. This album celebrates the ACO’s history of superlative and ambitious music-making, presenting the recordings that have thrilled music-lovers for decades.

The album opens with Irkana IV by Peter Sculthorpe, recorded in 1996 and drawn from one of the most highly award-winning recordings in Australian classical history. Two other Australian composers with whom the ACO has a close history – Elena Kats-Chernin and Joseph Tawadros – are also represented.

The album showcases the stunning breadth of the Orchestra’s music-making by delving back into the Baroque (Bach’s beloved double violin concerto), the Classical (Mozart’s ‘Jupiter’ symphony), and into the Romantic era (Brahms, Wagner and Tchaikovsky). Each work is introduced in the booklet by the ACO’s Artistic Director Richard Tognetti.