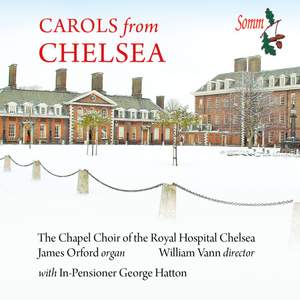 The Chapel Choir of the Royal Hospital Chelsea, William Vann

Under the meticulous direction of William Vann, their reading of Howells’s A Spotless Rose is, well, spotless, while John Rutter’s Dormi, Jesu is saved from schmaltz and sung with the sweet,... — The Guardian, 18th December 2016 More…

8 Traditional English Carols: No. 6. Truth Sent from Above

Holy Boy (A Carol of the Nativity)

SOMM celebrates Christmas this year with Carols from Chelsea, a delicious offering from the Chapel Choir of the Royal Hospital Chelsea under their Director, William Vann. The Royal Hospital, founded in 1682 by Charles II, is the home of the iconic Chelsea Pensioners, who are all retired soldiers of the British Army. The Chapel Choir sings for the Sunday morning Matins service in the Royal Hospital’s Wren Chapel during the year, but in December provides the music for carol services and other Christmas-themed events almost every day. This recording showcases some of the Choir’s most cherished carol repertoire, alongside solo organ music performed by the Royal Hospital’s Organ Scholar, James Orford, and a very special performance with Chelsea Pensioner George Hatton. George is known for his occasional singing in the Chelsea Pensioners’ Club in the evening, and during December he has been known to join forces with the choir for a song or two. It was one of those moments that gave them the idea to record something with him on this album and the last track, White Christmas, could hardly have ended the disc more joyously! This is the first professional recording George has ever made. And, at the age of 88, it gave him great pleasure to sing with such a wonderful choir. Many of the Royal Hospital’s carol services begin with Franz Gruber’s spine-tingling carol Stille Nacht, an especially moving carol to hear in the original German, given its celebrated performance in the trenches on Christmas Day, 1914. Once in Royal David’s City is the first of three carols that are usually sung with the full congregation, opening with the famous solo that captures the mood of Christmas like nothing else. In between that and Irving Berlin’s wonderfully un-wintry White Christmas, performed here in a new arrangement by Jim Clements, we hear mostly the work of English composers, from the Renaissance-era genius William Byrd to the contemporary composers Francis Pott and John Rutter. British organist Thomas Trotter’s arrangement of Leroy Anderson’s light-music classic Sleigh Ride leads us into John Gardner’s thrilling setting of the old text Tomorrow shall be my Dancing Day, the side drum part played on one of the Royal Hospital’s beautifully decorated instruments.

Under the meticulous direction of William Vann, their reading of Howells’s A Spotless Rose is, well, spotless, while John Rutter’s Dormi, Jesu is saved from schmaltz and sung with the sweet, gentle grace it deserves.