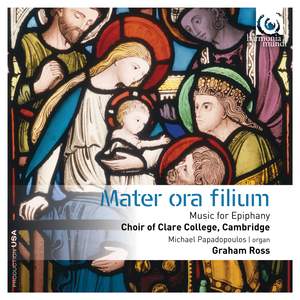 every bit as successful as its predecessors … Judith Weir’s Illuminare, Jerusalem…is given a superb rendering, as is Bax’s Mater ora filium … An exceptionally satisfying CD. — Choir & Organ, January 2017, 5 out of 5 stars More…

trad.: O worship the Lord in the beauty of holiness!

trad.: Hail to the Lord’s Anointed!

Niles: I wonder as I wander

Berkeley, L: I sing of a maiden

trad.: As with gladness men of old

Graham Ross directs the Choir of Clare College, Cambridge in music celebrating the feast of Epiphany, culminating in Arnold Bax’s unaccompanied double-choir masterpiece, 'Mater ora filium' (1926). The feast of Epiphany falls on 6 January, 12 days after Christmas. Marked in the Christian world with the story of the Magi, many composers have been inspired by the account of ‘the three kings’ following the star, bringing their gifts of gold, frankincense and myrrh. This sequence of music explores some of the greatest musical contributions to the feast, principally from the 16th and 20th centuries. Three great Epiphany hymns frame this sequence, all in new arrangements by Graham Ross, and all here receiving their première recordings. Graham Ross has also written the excellent booklet note and is aided and abetted, again, by John Rutter as producer, engineer and editor.

every bit as successful as its predecessors … Judith Weir’s Illuminare, Jerusalem…is given a superb rendering, as is Bax’s Mater ora filium … An exceptionally satisfying CD.

This wide-ranging selection from Graham Ross and the Choir of Clare College, Cambridge, is their most imaginative so far. There is homely Cornelius, baleful Judith Weir, and to end some hair-raising singing from soaring sopranos and resonant young basses in Bax’s ecstatic Mater ora filium for double choir.

While the richness of Bax’s quasi-orchestral writing is relished to the full the performance always moves forward with a sense of purpose. The choir sings with complete assurance and the sopranos are especially valiant – the top C at the climax on ‘Lord of right’ is hit truly and sustained thrillingly. This is a superb performance…with rewarding and varied music, marvellously performed, this disc is a sure-fire winner.

An effective post-Christmas sequence of music for Epiphany … One of my favourite offerings from amateur church and collegiate choirs this season.