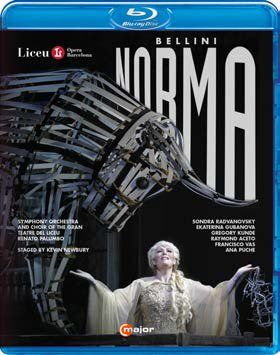 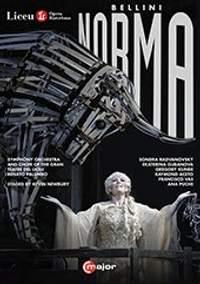 “If we weep from emotion on hearing it, it’s nothing to be ashamed of” Richard Wagner on Bellini’s most famous opera Norma, the most successful work by the last and greatest composer of bel canto. This new production of Norma, directed by Grammy Award-nominated opera, theatre and film director Kevin Newbury and starring Sondra Radvanovsky as a “powerful, elegant” Norma (New York Times) and Gregory Kunde as Pollione, is “something very special. The word ‘historic’ is used perhaps a little too often but tonight there really is no other adjective to describe the sensational performances offered to us by Sondra Radvanovsky and Gregory unde.” (operatraveller.com)

Radvanovsky’s performance as Norma has been the fixed point of Newbury’s staging as it has travelled from San Francisco where it opened in September 2014, to Barcelona, and on to Chicago and Toronto, and was enthusiastically received from the off: British Opera magazine described her as “fearless in scaling the heights of this bel canto challenge. Her range of colours, from smoky to crystalline, and her authority [...] were wondrous and energizing, starting with a consummately phrased ‘Casta Diva’”.

[Radvanovsky’s] ‘Casta diva’ is dispatched with juicy flair, but it’s in the preceding lines tht the soprano really shows her mettle. Here Radvanovsky astutely establishes Norma’s divided loyalties rather than affecting to channel the voice of divine ‘Irminsul’

This probably now takes the lead as the finest version of Norma available on film.

Radvanovsky’s soprano is indeed a mettlesome instrument, sizeable, colourful, extremely well grounded – each of her finespun, long-sustained high pianissimos is a pleasure to hear – and its possessor certainly knows how to command the stage.