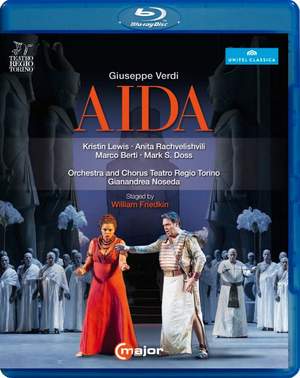 A dramatically satisfying – and well-filmed, production which can stand alongside the finest. — MusicWeb International, 6th December 2016

Originally commissioned to celebrate the completion of the Suez Canal and the opening of Cairo’s new opera house, Verdi’s Egyptian epic Aida is here seen in a spectacular new staging in the Teatro Regio Torino by the Oscar-winning American film director William Friedkin, creator of such famous movies as The Exorcist and The French Connection. The cast featuring the American soprano Kristin Lewis, who exhibits “a remarkable voice, which she uses with powerful dramatic instinct” (La Stampa), and the Georgian mezzo-soprano Anita Rachvelishvili, whose Amneris “dominates the stage with her dark, rounded, irresistible voice and extraordinary stage presence” (La Gazzetta Musicale) is first-rate. All were united in praise of Noseda: “he controls everything - orchestra, singers, chorus, dancers, acrobats – with an all-encompassing overview” (La Stampa); “he knows exactly when it’s time to linger over a timbre, a colour, an expressive chord” (Corriere della Sera).

A dramatically satisfying – and well-filmed, production which can stand alongside the finest.