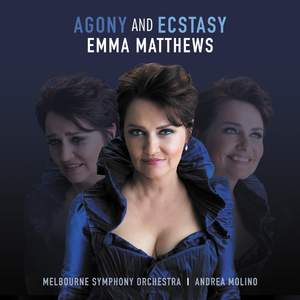 She is, for example, affectingly sensitive in Violetta'a letter reading and Amina's lament for her lost love, and her Rosina proves exceptionally lively/ The most fully realised portrayal of... — Opera, July 2017 More…

Emma Matthews – renowned as the finest Australian soprano of her generation – unveils her triumphant third album: Agony and Ecstasy.

Inspired by words from Verdi’s opera La Traviata, the album presents a rich and timeless journey through the many faces of love, drawing on opera that employed the power of music to bring alive experiences of the heart as never before.

Agony and Ecstasy opens with a joyful expression of young love by Juliet in Gounod’s Shakespeare-inspired opera: ‘I want to live in this heady dream forever!’ A new mood is introduced by the calculating determination of Rosina to win her lover in The Barber of Seville; the album closes with the poignant desperation of Elvira’s ‘mad scene’ in I Puritani, when she thinks herself abandoned. Between these, we witness some of opera’s most vivid characters as they grapple with love.

The eight arias – by Bellini, Rossini, Verdi, Donizetti and Gounod – were composed within sixty years of one another. Influenced by a Romantic desire to explore love and emotion, these composers were given the perfect vehicle by the bel canto compositional style, which prized both vocal fireworks and honest, heartfelt emotion.

Matthews has given acclaimed live performances of many of the roles on the album throughout a career that has taken in opera houses and concert halls across the globe. The presence of legendary conductor Richard Bonynge – husband of the late Dame Joan Sutherland and mentor to Matthews – is strongly felt: she first performed many of these operas with him, and in some cases the ornamentation was handed on directly from Maestro Bonynge.

Agony and Ecstasy was recorded with the Melbourne Symphony Orchestra under the baton of conductor Andrea Molino by ARIA-Award-winning Tonmeister Virginia Read.

She is, for example, affectingly sensitive in Violetta'a letter reading and Amina's lament for her lost love, and her Rosina proves exceptionally lively/ The most fully realised portrayal of all is Fiorilla…the cavatina expertly mixes delicacy with incisiveness, while the cabaletta offers all the requisite vocal excitement - including a splendid interpolated top E before the exhilaratingly decorated repeat.